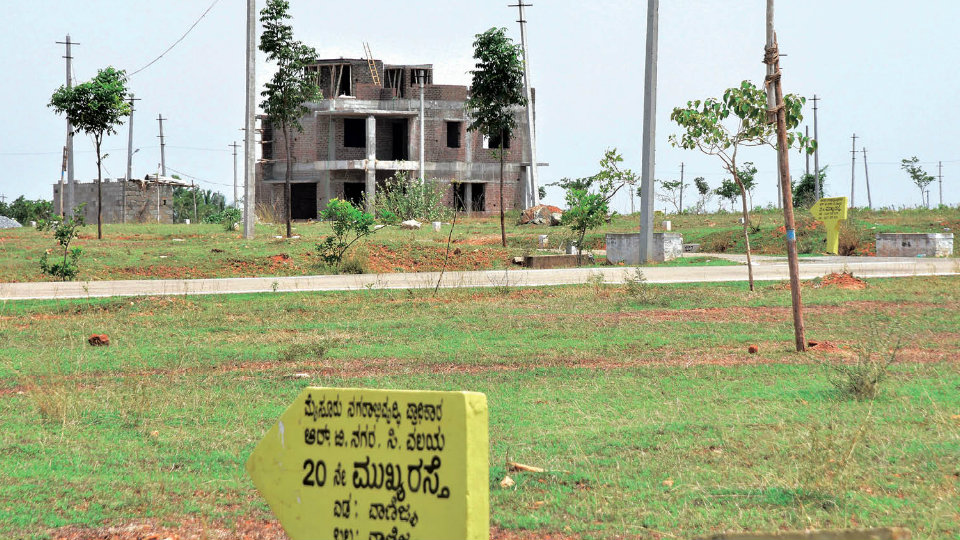 Mysuru: Facing a severe cash crunch, MUDA (Mysuru Urban Development Authority) is looking at various means of revenue earning. In a move towards augmenting its depleting revenue, MUDA has planned to cancel the allotment of 1,132 residential sites for violation of various norms and re-allot them through a public auction.

The MUDA, burdened by rising administrative expenditure, is forced to look at more avenues for raising its revenues. Now MUDA has set out looking for sites which have violated norms and also un-allotted sites in different parts of the city.

After a thorough scrutiny, MUDA has found 1,132 sites which have violated the terms of allotment and 9,500 sites that have remained un-allotted for decades. MUDA now plans to cancel the allotment of all the 1,132 sites and auction 75 percent of them and thus earn huge revenues. MUDA is planning to do the same in the case of 9,500 sites, found un-allotted all these years.

As far as the rest of the 25 percent sites are concerned, the MUDA plans to classify them as A, B and C categories and re-allot them as per rules. As an alternative, the MUDA is also looking at auctioning these sites as well if it is more profitable.

MUDA Commissioner P.S. Kantharaj said that the MUDA had not identified sites in layouts across the city that lay vacant in violation of norms. But during a drive conducted recently, the MUDA discovered that there were 1,132 allotted sites which existed in violation of norms and as well as 9,500 other sites which were left un-allotted all these years.  Now, MUDA is planning to cancel the allotments made and auction them, which would fetch MUDA good revenues, he said and added that MUDA has come up with a comprehensive plan to secure all its valued sites and other properties coming under its jurisdiction.