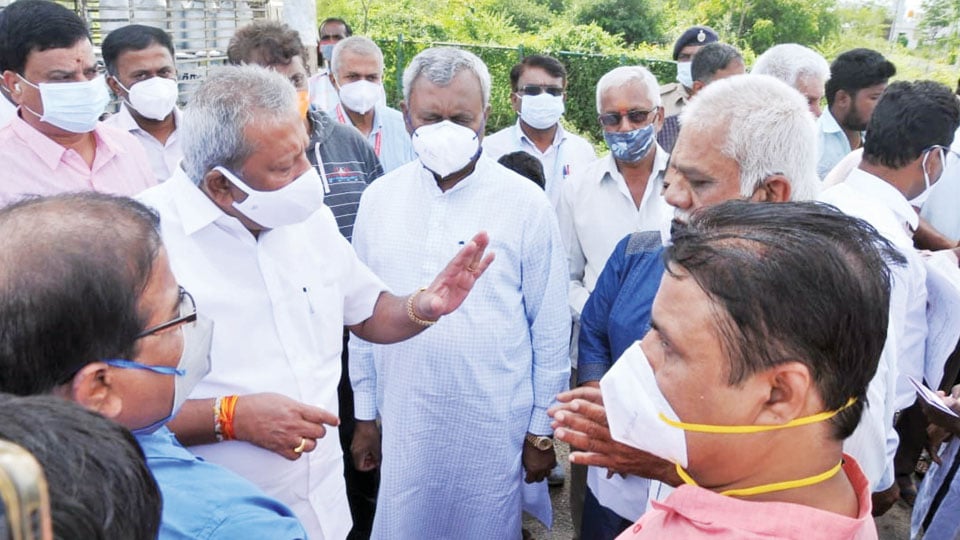 MUDA to form new layout on 700 acres at Yelwal: Minister

Mysore/Mysuru: Mysuru Urban Development Authority (MUDA) has proposed to develop a new layout on 700 acres of land in Kamarahalli of Yelwal hobli with the cooperation of land owners in 50:50 ratio. This was disclosed by Minister Byrathi Basavaraj during a review meeting of MUDA here yesterday.

‘Use Rs. 377 crore to provide infrastructure’

He said the MUDA has taken steps to provide infrastructure in the Layouts developed by it since a long time. All basic facilities will be provided in those Layouts at the earliest, he said.

On the Group Housing Scheme mooted by MUDA, he asked MUDA officers to approve this scheme in their Board meeting and then forward it to the State Government for further course of action. This scheme will be discussed with the Department officials before finalising, he noted.

About women Corporators of Mysuru city submitting a memorandum seeking early conduct of Mysuru Mayoral polls, the Minister said he would examine whether it was possible to hold the elections now in the wake of Corona crisis. A suitable decision will be taken at the earliest, he added.

Residents poured out their woes before the Minister during his inspection-spree. A resident of Lalithadripura said the MUDA-approved Layouts have not been provided basic facilities including road and drinking water. Byrathi said the BJP Government came to power just one year ago but these problems have been existing since last five years. The former Chief Minister from Mysuru, Siddharamaiah should have done this long ago, he said.

Sabitha Uthappa, a resident of Lalithadripura (South), said the MUDA supplies drinking water three times in a week. But it was salt water that cannot be consumed. Residents have developed health problems like skin irritation and allergy. The MUDA must supply Cauvery water for their area, she urged. Later,  the Minister visited a Park developed by MUDA at Hanchya-Sathagalli and planted saplings.

A public park coming under MUDA at Hanchya-Satagalli ‘A’ Zone will be developed on ‘Tree Park’ concept. Saplings of teak, jackfruit, mango, honge, sampige, amla, rosewood, guava and other fruits and medicinal plants have been planted. Some of the saplings have been purchased not only from the Forest Department but also from Rajahmundry in Andhra Pradesh.

Each sapling has been planted with a distance of 15 feet. After the full development of layout, it has been proposed to provide walkers path, fountain and children’s playing items inside the park.