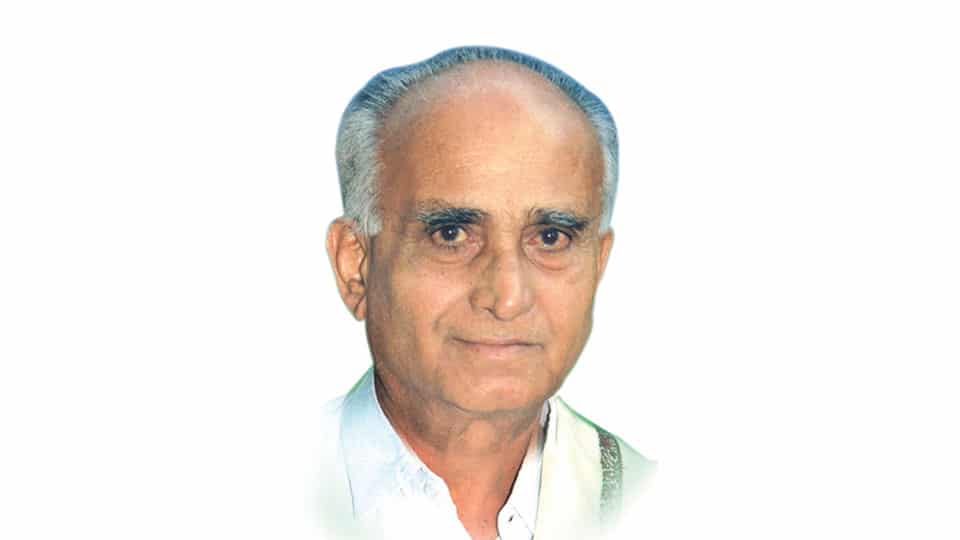 G. Madegowda, a veteran politician, who was the President of Mandya Raitha Hitarakshana Samiti, was synonymous with the Cauvery agitation for over four decades in the district.

He leaves behind his wife Padma, sons former MLC Madhu G. Madegowda and Dr. Prakash, two daughters and a host of relatives and friends.

Last rites will be performed with full State honours at Hanumanthanagar in Maddur taluk later this evening, according to sources.

A seasoned politician, he was elected as an MLA from the erstwhile Kirugavalu Assembly segment in Mandya district six times and twice as an MP in 1989 and 1991. He had served as the Forest Minister in R. Gundu Rao-led Congress Government in early 1980’s. His activities in public sphere spanned more than six decades.

Born at Gurudevarahalli village near K.M. Doddi in Maddur taluk on July 10,1927, G. Madegowda was a contemporary of other veteran political leaders from the district such as H.K. Veerannagowda, K.V. Shankaregowda and S.M. Krishna. He studied at Maharaja’s College in Mysuru and Government Law College at Bengaluru.

Madegowda was one of the prominent leaders who spearheaded the Cauvery agitation along with Karnataka Rajya Raitha Sangha and other groups to protect the interests of the State farmers in the dispute with Tamil Nadu over sharing of water.

In a bid to promote education in backward areas of Mandya, Madegowda founded the Bharathi Education Trust which has nearly 30 colleges and other educational institutions under it, where thousands of students are getting education. He had also started a residential school at Hanumanthanagar.

He had built the famous Atmalingeshwara Temple at Bharathinagar in 1988 in a 46-acre area at a cost of Rs. 5 crore and also constructed a community Hall and other buildings for the benefit of public. He was instrumental in the establishment of Gandhi Bhavan at Vidyanagar in the heart of Mandya. Leading a Gandhian lifestyle, Madegowda always fought for protecting the interests of  farmers of the State. He also built a Gandhi Bhavan at Bharathinagar, where a Library is also set up. Considering his achievements and service to the society, the University of Mysore honoured him with a Honorary doctorate.

Madegowda started Bharathi Co-operative Sugar Factory at K.M. Doddi in 1969, which was  shut down in 1974, following which it was taken over by Chamsugar company. He had also set up a Tuberculosis and Chest Diseases Hospital at B. Hosur in 1969, which was inaugurated by the then Chief Minister Veerendra patil.

In his condolence message, Chief Minister B.S. Yediyurappa said Madegowda was a true Gandhian and a farmers leader. Pointing out that he was always in the forefront of Cauvery movements, he said that Madegowda had strived for the development of Kirugavalu Assembly segment which he represented six times and Mandya district. The State has lost one of its biggest farmer leaders, he added.

Suttur Seer Sri Shivarathri Deshikendra Swamiji said that Madegowda was known for protecting the interests of farmers even under adverse circumstances.

Recalling that Madegowda had taken part in the freedom movement, the Seer said that Madegowda had quit the Parliament over Cauvery issue. Always standing by the principles which he advocated, Madegowda always stood with the farmers of Mandya whenever the district faced a crisis over Cauvery issue or even other issues that bothered the district. He has prayed the almighty to give the strength to his family members to bear the loss, the Seer said.

Opposition leader and former Chief Minister Siddharamaiah in his condolence message said that G. Madegowda dedicated his entire life for protecting the interests of farmers during the Cauvery row with Tamil Nadu.

Pointing out that the departed leader’s contribution to the society is very much noteworthy, he said that with his demise, the State has lost one of  its  prominent leaders,  who always stood up whenever the State faced troubles over water and other issues and took up a spirited fight to get justice for the State.

Former Chief Minister and JD(S) leader H.D. Kumaraswamy said that G. Madegowda was active till his last days in public life. Noting that he always took the lead in spearheading agitations  over water issues, he said, that in recent days, Madegowda had taken the lead for protesting against privatisation moves of MySugar factory at Mandya.

Born as a fighter, Madegowda, who led a Gandhian lifestyle will always be remembered as an uncompromising farmer leader. He is also credited with starting many educational institutions for the benefit of poor and needy students. His demise is a great loss to the district, he said and added that he has expressed his heartfelt condolences for his family.