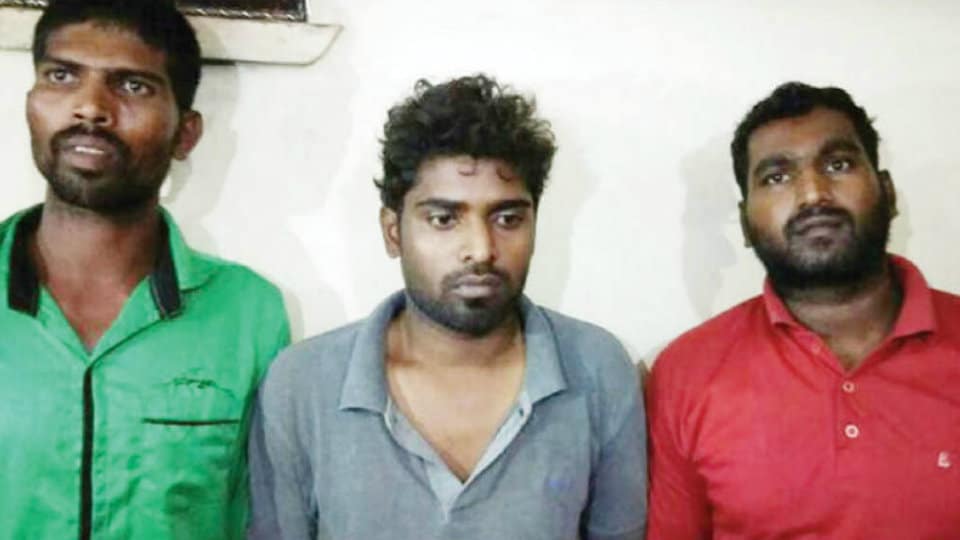 K.M. Doddi Police, who had launched a hunt to nab the supari killers of Shashibhushan, the Head Master of the Government School in Bidarahosahalli, who was murdered by the supari killers near Arechakanahalli on Mar. 31 morning, have been successful in nabbing three killers from the outskirts of Mysuru yesterday and have launched a hunt to nab two more accused who are absconding.

The arrested three supari killers have been identified as Suresh, Venkatesh and Mahadev, all residents of Gandhinagar in Mysuru, disclosed Mandya SP Sudheer Kumar Reddy.

It may be recalled that on Mar. 31 morning, Shashibhushan, who was on his way to the school was waylaid by five supari killers near Arechakanahalli who were following Shashibhushan in a car and killed him by  slitting his throat.

K.M. Doddi Police, who had suspected the involvement of Shashibhushan’s wife Shanthamma and daughter Navyashree, took them into custody soon after the last rites of Shashibhushan was performed and subjected them to interrogation, during which they had confessed of paying Rs. 5 lakh to Mysuru-based supari killers to eliminate Shashibhushan.

Based on the information provided by Shanthamma and Navyashree and from the messages sent to the killers through WhatsApp, the Police had formed two teams to nab the killers and were successful in nabbing three of the five members of the gang from the outskirts of Mysuru.

ONE COMMENT ON THIS POST To “Murder of Head Master near Mandya: Three Mysuru-based supari killers nabbed”