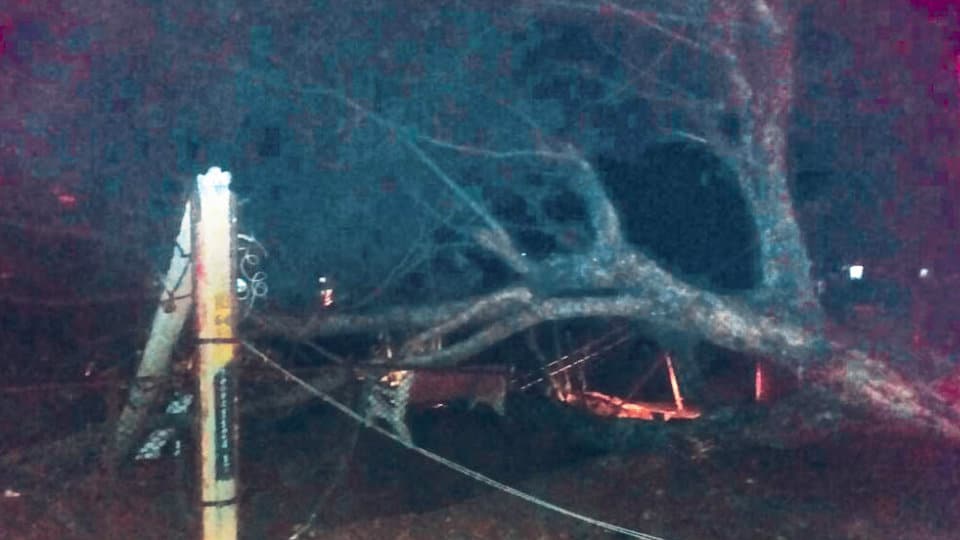 Pre-monsoon showers yesterday evening brought some relief to Mysuru that was reeling under rising temperature.

While several low-lying areas complained of severe water logging, a giant tree fell on the main road in Kalyanagiri. Along with the tree, four electric poles came crashing down, blocking traffic on the busy road. Following the incident, Ward 55 Corporator Shoukath Pasha arrived at the spot and informed the Mysuru City Corporation (MCC) authorities.

Later, MCC Zone-9 Assistant Commissioner Puttasheshagiri arrived with ‘Abhaya’ team and cleared the tree. As Chamundeshwari Electricity Supply Company (CESC) Assistant Electrical Engineer Nandeesh opined that clearing the fallen electric poles during night would damage more poles, the operation was restricted to shifting of the tree that had fallen on the road. Seeing the MCC authorities clearing the tree, several residents of the area assembled at the spot and told the authorities that moments before the tree crashed, two women had passed the road on their two-wheeler. They urged the authorities to clear two more trees that were standing precariously near the park and alleged that despite several complaints, the MCC had only pruned the branches instead of clearing the trees.