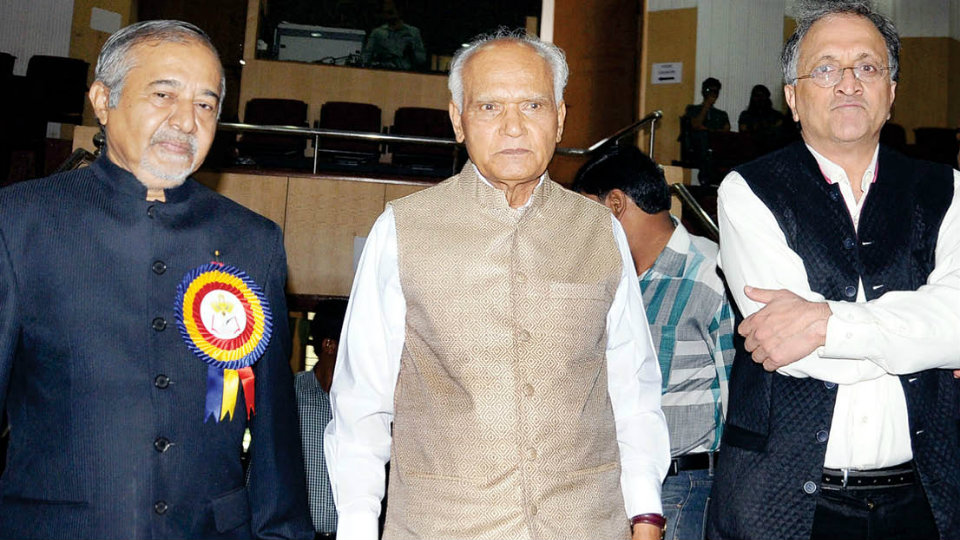 As an Englishman boasted, whenever there is trouble in Heaven, the Gods send for an Englishman. The magic of English language, if not the Englishman, seems to endure not only in India but also in all parts of the world with the advent of Computer Science.

If  Sunday 18th June 2017 was a day of shame for Indian cricket, it was a day of celebration for the Mysuru literati and cognoscenti. Even as  Indian batsmen fell like ninepins before the tsunami attack of Pakistan playing in England the ICC Champions Trophy at the Oval, London, here in Mysuru, the Mysore Literary Association’s Mysuru Literary Fest was celebrating its impressive success with its President Prof. K.C. Belliappa beaming an infectious smile.

Star of Mysore was the media partner for this labour of love of a few lovers of English literature led by Prof. Belliappa as President and Dr. H.S. Shivanna Vice-President.

When  Prof. Belliappa broached the subject with me, I had my doubts about the local English buffs supporting it with attendance, except, of course, the snobs. Among the latter those who strut around like cockerels clucking their kind of English with a superiority complex — students of English Literature, Professors and Lecturers teaching English and those retired apart from those addicted to English books like myself. No wonder, the promoters of the Mysore Literary Association, a registered body, were all retired English teachers and past students.

In retrospect, I was proved wrong. The venue — Senate Bhavan at Manasagangothri — was almost full despite my apprehension that such a huge auditorium was a wrong choice. Well, at the end, being present through the proceedings, I thought I was a negative person left wondering how Prof. Belliappa pulled it off successfully without any glitch.

As an Englishman boasted, whenever there is trouble in Heaven, the Gods send for an Englishman. The magic of English language, if not the Englishman, seems to endure not only in India but also in all parts of the world with the   advent of Computer Science. Let it be.

The honour of inaugurating the Fest was bestowed upon the well-known Kannada novelist and writer-philosopher Dr. S.L. Bhyrappa. What was a Kannada litterateur doing in an English Lit Fest? No matter what the answer is, I found his was the only speech that was intellectually profound and satisfying, delivered in immaculate English with a clipped accent though. In about an hour, he covered the vast, nay infinite, space of the art and craft of literature in all its dimensions and dynamics.

Having studied Philosophy as his academic subject, Dr. Bhyrappa propounded his ‘philosophy’ that a writer without grounding in the study of Philosophy is shallow and a Philosopher sans literary skills is dry. And gave the example of his first novel ‘Vamshavriksha’ that he wrote while doing his Doctorate in Philosophy.

He took his listeners in one wide sweep from the physical world of  writing to the metaphysical world of life, life’s purpose and death. The question of death seems to haunt him  all the time so much so he might be exploring it in many of his novels. Therefore, I was not surprised, as I was listening to him with rapt attention, that he alluded to Nachiketas and the Buddha — both were wanting to know why men die? And when a man dies, what happens?

Some sages say soul exists. But what is a soul ? Some sages say nothing of him exists. The secret of death is in Katha Upanishad given by Yama, the God of Death! Well, well…

Be that as it may, there was much truth in his speech that would do lot of good for the potential writers and also those struggling writers with ambitions but lacking in genius and ability to work burning midnight oil while during day work towards getting first-hand experience of the world around. I remembered Salman Rushdie writing on similar lines in his autobiographical book ‘Joseph Anton.’ How I wished Dr. Bhyrappa continued with his thought-provoking, insightful speech on writers, literature and its purpose.

After the tea-coffee-biscuit-pee break, came the Historian Dr. Ramachandra Guha to set the stage on fire with his loud, roller-coaster talk on “History beyond Chauvinism.” Like the jelly in a glass kept on the table quivered in the film ‘Jurassic Park’ as the giant dinosaur walked on the earth nearby, Guha’s over-confident assertion of his own new-found commandments made our ear-drum quiver in mild discomfort. Later, he fielded some questions with great aplomb and ease like the best-fielder — Jonty Rhodes or our own Eknath Solkar — in cricket.

When all seemed settled, I asked a straight, simple question sans frills or preamble:

There is a famous saying that all history is bunk. What have you got to say?

The Historian-genius he is, pat came his reply: Yes, yes. It was Henry Ford. There was a time in India it was believed that good history could be written only by Bengalis and in the forefront was the freedom fighter and Historian Bankim Chandra Chatterjee. Not surprisingly, people derisively called history as “All History is Bankim.” Applause sanctified his reply.

Dr. Ramachandra Guha’s observation about Modi government honouring the Guru of Art of Living Sri Sri Ravishankar with Padma Vibhushan while giving an apology of a honour Padma Shri to a great scholar and litterateur Dr. S.L. Bhyrappa could not have been more appropriate. It was a telling comment on Modi government’s choice. But then same could be said of all the preceding governments too.

However, it is wise for a secular government to relegate religion in preference to other areas of human activity for such honours. I personally feel that Dr. Bhyrappa, despite his body of works that included novels and books on various other subjects, literary oeuvre of highest standard, has been cheated of top honours like Jnanpith Award and Padma Award of higher level. May be, as the Bible says ‘Time and Chance’ happens to the undeserving too. I am happy, a man of consequence like Dr. Ramachandra Guha, has voiced this discrimination and injustice.

As for me, it was a Sunday well spent with a good-night cap at the Sports Club.