Home » Columns » Abracadabra By K. B. Ganapathy » Musings on Siddharamaiah’s rebuke to an IPS Officer in public 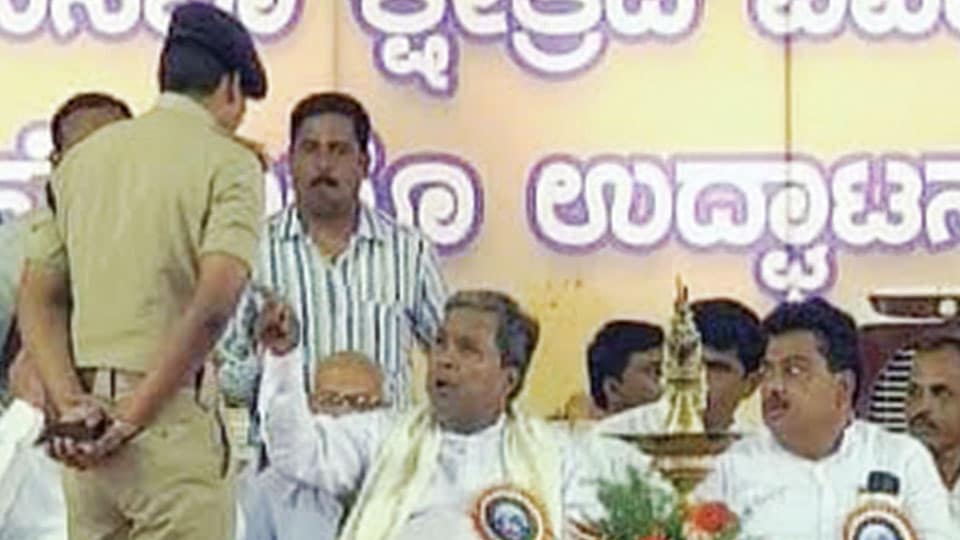 Musings on Siddharamaiah’s rebuke to an IPS Officer in public

On April 20, 2017 Chief Minister Siddharamaiah was in Malavalli, Mandya District, to fulfil a public engagement. As his motorcade was whizzing past the town-roads on his way to Shanthi College Grounds to launch various development programmes, hundreds of BJP workers displayed black flags, demanding waiver of farm loans. They even tried to stop the caravan of Karnataka’s Julius Caesar Siddharamaiah.

Police effectively intervened and Siddharamaiah’s march of victory (he had just then won the Gundlupet and Nanjangud by-elections trouncing BJP, his arch rival, with comfortable majority) moved on its designated place where the public function was held.

Once on the stage, the first engagement of Siddharamaiah, before slipping into somnolence, was to summon the Superintendent of Police, Mandya District, C.H. Sudhir Kumar Reddy, IPS and in a face livid with anger, dilated nostrils breathing fire and brimstone, eyes popping out reminiscent of Lord Shiva of Hindu mythology opening his third eye to incinerate the person before him, gave the SP a dressing down, castigating him in full public view on the open stage. It was an unseemly public spectacle of a confrontation between an IPS Officer and an elected Chief Minister where the IPS Officer was at the receiving end, standing meekly like a servitor.

Seeing this incident on the TV, I felt sad for the Officer, but it also took me down the memory lane.

When S.M. Krishna was the Chief Minister, he went to Bijapur (now Vijayapura) to conduct the developmental review meeting where the heads of all the major departments and Secretaries should be present. The meeting enables the Government to evaluate the performance of its officers. One Secretary of an important Department, Acharya, IAS, son of our city resident late V. Siddharthacharry, former Ambassador, was conspicuous by his absence. A journalist later asked the Chief Minister about the absence of Acharya. S.M. Krishna’s tongue-in-cheek answer was, “I will immediately suspend him.”

Some journalists, who belong to that rare breed known as “news-hounds”, never give-up on the scent. On arriving in Bengaluru, that journalist asked Secretary Acharya what the Chief Minister had told the media in Bijapur. Acharya’s cryptic reaction was: “Let him try.” Of course, Acharya was not suspended nor warned.

Officers of the All India Services like IAS, IPS and IFS represent and head an Institution under the Constitution. These Ministers can’t shake them by threats of suspension, dismissal etc., for their acts of omission and commission. Their service and conduct rules are different. At best these Ministers can transfer them, nothing beyond.

Therefore, the Chief Ministers by rebuking these Officers in full public view cause a major damage to these Constitutional Institutions more than to the individual Officers. Siddharamaiah, by his conduct, has badly lowered the dignity of SP’s Office. So much so, the followers of Siddharamaiah would get the message that they too can intimidate this SP. This will surely amount to an act of subverting the SP’s Office.

If I were the Chief Minister (big joke, hey!) I would have asked my PA to ask the SP to see me later in the Guest House or in private, after the function. Let it be.

While discussing this incident in the Club, sipping the spirit of wisdom, my friend recalled an incident involving  Morarji Desai, Chief Minister of the then Greater Bombay State that included Gujarat and part of present Karnataka too.

Those days, for sometime after independence in the 1950s, the British Civil Service was continued. It was ICS (Indian Civil Service) which is now IAS (Indian Administrative Service); it was IP for higher Police Officer (Imperial Police), now IPS (Indian Police Service).

Be that as it may, to come to the point, one Shanbhog IP was posted to Dharwar (which was under Bombay Province then). People were curious to know this sudden transfer of the old and posting of the new Superintendent of Police (SP).

Like what Siddharamaiah did on April 20 at Malavalli to the SP, Morarji Desai too had enacted such show of power at a function in Bombay where he rebuked Shanbhog, IP, the SP, in public view.

Shanbhog, unlike our Mandya SP Sudhir Kumar Reddy, did not take Morarji Desai’s reprimand lying down, rather he returned the compliment to this giant of a politician of those days Morarji Desai with the words:

“Sir, hold on. You can’t be talking to me in this manner, in this place.” And walked away.

A helpless Morarji Desai could only transfer him to Dharwar. In fact, a better place than Bombay both climate-wise and work-wise. And this was called a ‘Punishment Posting.’

No Chief Minister can suspend, much less dismiss an IPS Officer, at worse he can transfer him. Let us see where Mandya SP Sudhir Kumar Reddy  would be transferred to.

Another friend picked up the cue and decided to dilate on the conduct of these IAS, IPS Officers in relation to politicians, even as the glass that elevates our spirit was re-filled. He says there are two kinds of IAS, IPS Officers. One is subservient to the big boss, the Ministers and MPs, MLAs. Always at their service, not at the service of the law of the land. Another, “couldn’t careless” kind, who respect their masters but would not lick their boots. The first category expects some reward in career and after; the second category lives and works with pride and self-esteem. The first one is vulnerable to corruption while the second one is cautious.

He gave an example about officers who curry favours from the Ministers.

Once Indira Gandhi was coming to Mysore in the early 1980s after her phoenix-like resurrection when the Janata Party collapsed. Some opposition party workers wanted to hold a black flag demonstration against Indira Gandhi at the Hardinge Circle where her motorcade was to pass by. The then SP refused to give permission for this peaceful demonstration, which is a constitutional right.

The SP simply lathi-charged and drove them away from the spot and Indira Gandhi’s motorcade passed off peacefully and grandly without any difficulty that our Siddharamaiah faced at Malavalli.