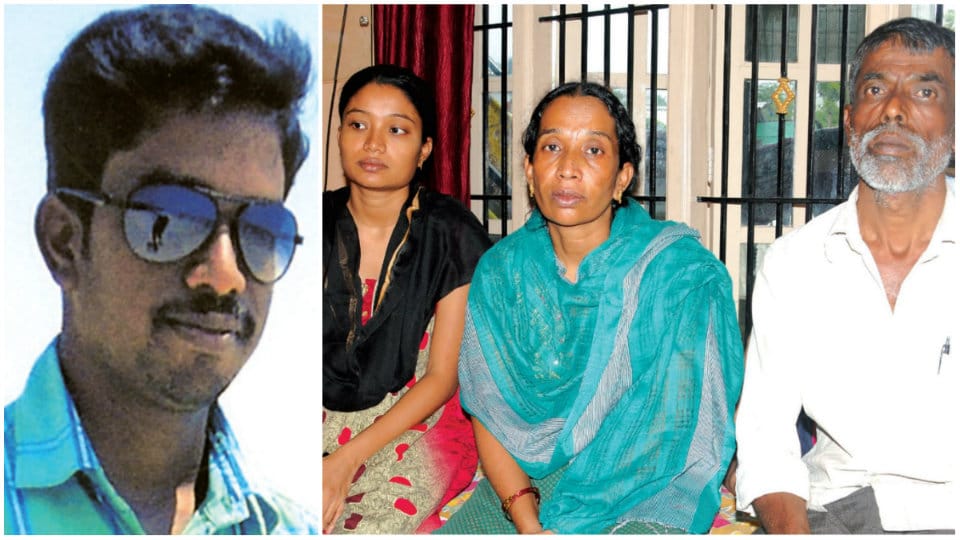 Mysterious death of city youth in Saudi Arabia: 40 days gone by, body yet to reach city

Mysuru: A mother’s cry to see the face of her son who died under mysterious circumstances at Dammam in Saudi Arabia is yet to be heard as the body of 27-year-old Shabeer, who died 40 days ago (March 25), has not yet reached the city for the family members to perform the last rites.

Deceased Shabeer is the only son of Wazeer Sab and Dilshad couple, residents of Vidyaranyapuram 32nd Cross here.

The body of Shabeer was found hanging in the room on March 25 and the photo of Shabeer hanging from the ceiling fan sent to the family members of Shabeer has raised doubts that Shabeer had committed suicide as both the legs of Shabeer is firmly resting on the floor.

Meanwhile, Dilshad has accused Khaleel, the agent, who took Shabeer to Dammam of killing her son as he used to pester Shabeer to pay Rs. 1.5 lakh commission for getting him a job and giving different versions to the family members about Shabeer’s death. Though Deputy Commissioner (DC) D. Randeep has called up the Embassy several times, no action has been taken to transport the body of Shabeer to Mysuru till now.

Shabeer, who was working as a cab driver at various travel agencies in Mysuru, had made a good name and was being appreciated by all. As he wanted to earn more money to get his sisters married, he contacted agent Khaleel, who is said to be a distant relative of Shabeer’s family from Arasikere, who assured him of getting a driver’s job with a pay of Rs. 30,000 a month.

READ ALSO  “Open to All” sign boards must at temples: DC

Shabeer left for Saudi Arabia on July 8, 2016 along with agent Khaleel, who had got a job of a driver to Shabeer in Dammam.

Shabeer joined as a car driver to Aseem, an industrialist in Dammam on July 10 and used to call his parents everyday. But in the meantime, Khaleel began to pester him to pay Rs. 1.5 lakh as commission, which had also resulted in a fight between the two.

Shabeer, who had gone on a Haj pilgrimage to Mecca, returned to Dammam and on Apr. 23 and 25, he had called his family in Mysuru and had talked to them. But on Apr. 25, just after 30 minutes of Shabeer calling his family and speaking with them, Shabeer’s family receives a call from Khaleel, who informed them that Shabeer had committed suicide by hanging and immediately disconnected the call.

Meanwhile, Shabeer’s mother Dilshad, speaking to Star of Mysore, has accused Khaleel of taking many people to Saudi Arabia for jobs and later pester them to pay him commission and added that similarly Khaleel was pestering her son Shabeer too to pay him commission for getting a job and had even thrown out Shabeer out of the room besides snatching away his (Shabeer) mobile phone which had resulted in Shabeer spending the night in a dates plantation.

Dilshad accused Khaleel of harassing her son, thrashing him, murdering him and later hanging his body to a ceiling fan in the room. She said that one of the youth from Tumakuru, who is said to be the roommate of Khaleel, has sent the photo of Shabeer hanging from the ceiling fan, which shows Shabeer’s leg standing firmly on the floor and a chair placed behind him in order to keep the body straight.

She said that MP Pratap Simha has assured of helping them to get the body to Mysuru. She has urged action be taken against Khaleel so that other innocent people do not suffer like her son.

Think twice before going to Arab countries for jobs through agents

As many people like to go to Arab countries to make money in a short span of time, one has to be very careful with the so called ‘agents’ who are luring innocent people in the pretext of getting them jobs and fleecing them later.

It is learnt that many people, who have secured jobs in Saudi Arabia, are luring people and later demanding huge commission, which they have made it as a business. The mysterious death of Shabeer is a warning bell to those who wish to go to Saudi Arabia to earn large sum of money in a short span of time.

It is doubted that these agents trap least educated people in the pretext of getting them driver and housemaid jobs with high salary and later pester them for commission.

Hence, one has to be very careful and think twice before approaching agents or else, they may end up being tortured by the so-called ‘agents.’

4 COMMENTS ON THIS POST To “Mysterious death of city youth in Saudi Arabia: 40 days gone by, body yet to reach city”