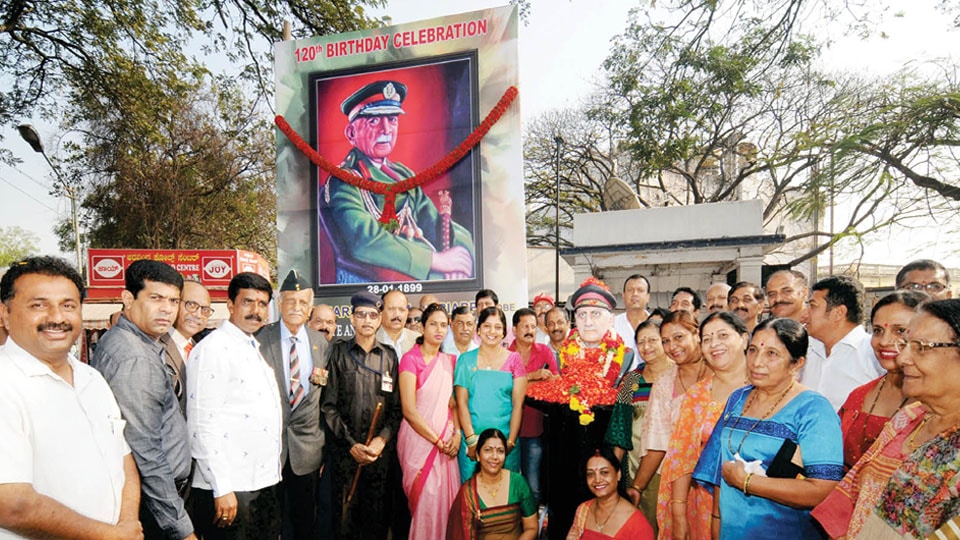 Mysuru: Kodandera Madappa Cariappa is a man known for many firsts, but he is best remembered as the legend who made the Indian Army truly Indian. Perhaps this is why people feel the time has come to honour the late Field Marshal with the ‘Bharat Ratna.’

This morning too, the demand for ‘Bharat Ratna’ was raised by Mysureans on the occasion of 120th birth anniversary celebrations of Field Marshal K.M. Cariappa. The event was marked by showering of flower petals on the bust and garlanding of a huge portrait of the late Commander-in-Chief of the Armed Forces at Field Marshal K.M. Cariappa Circle (Hotel Metropole Circle) on JLB Road.

Speaking on the occasion, former Mayor M.J. Ravikumar said that when he was the Mayor a few years ago, he took measures for installation of Cariappa’s bust at the Circle following a demand from Kodava Samaja.

Stating that both Field Marshal K.M. Cariappa and Siddaganga Seer late Dr. Sri  Shivakumara Swamiji very much deserved ‘Bharat Ratna,’ he said that the Union Government must consider this demand of the people.

Former Vice-President of Mysuru Kodava Samaja Cultural and Sports Club N.M. Thimmaiah said that he had written to the MCC and the Government demanding the installation of a life-size statue of the great warrior at the Circle in city. Recalling the achievements of Cariappa as Army Chief, he said Cariappa deserved ‘Bharat Ratna’ for his courage, bravery and valour.