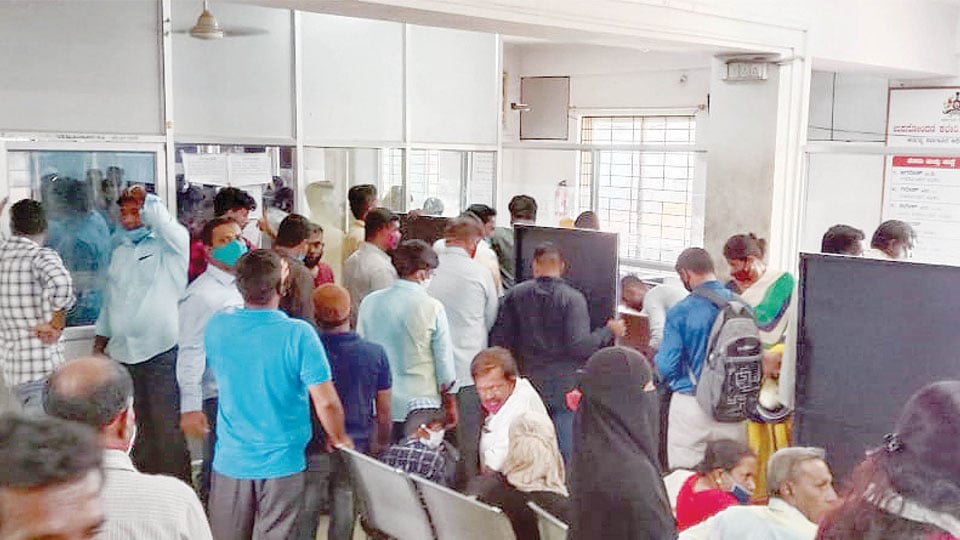 Mysore/Mysuru: Warning by medical experts on COVID-19 second wave seems to have had no impact on Mysureans if a large gathering at the Office of Sub-Registrar (East) was of any indication.

A big crowd was witnessed at this Office on Tuesday with no sign of social distancing. The State Government’s strict direction to people to follow the prescribed safety protocol has no takers as people were jostling at the Office to get their work done.

The Office of Sub-Registrar (East) situated on Dr. Raj Kumar Road in Kalyanagiri was abuzz with activities with a large number of people inside the Office with no masks or social distancing. This has put a big question mark over the citizen’s respect for the Government’s directive issued in public interest.

Ironically, the Officers at the Sub-Registrar’s Office told SOM that they have taken all precautionary measures to check the spread of pandemic. Registration of properties was now less when compared to previous years. Even the crowd at the office was not much, they claimed.

A reality check revealed that similar situation prevailed in other Sub-Registrar Offices in Mini Vidhana Soudha (Mysuru North),  Vijayanagar (West) and Ramakrishnanagar (South) with no private security guards to control the crowd.

Seeing people in large numbers, the Department Officers must introduce token system to avoid crowding inside the Office. Need of the hour was to make people aware about the safety measures announced by CM B.S. Yediyurappa recently.

“The Government Offices may become COVID-19 spreading factories if preventive steps were not taken immediately,” warned some concerned citizens of Mysuru.