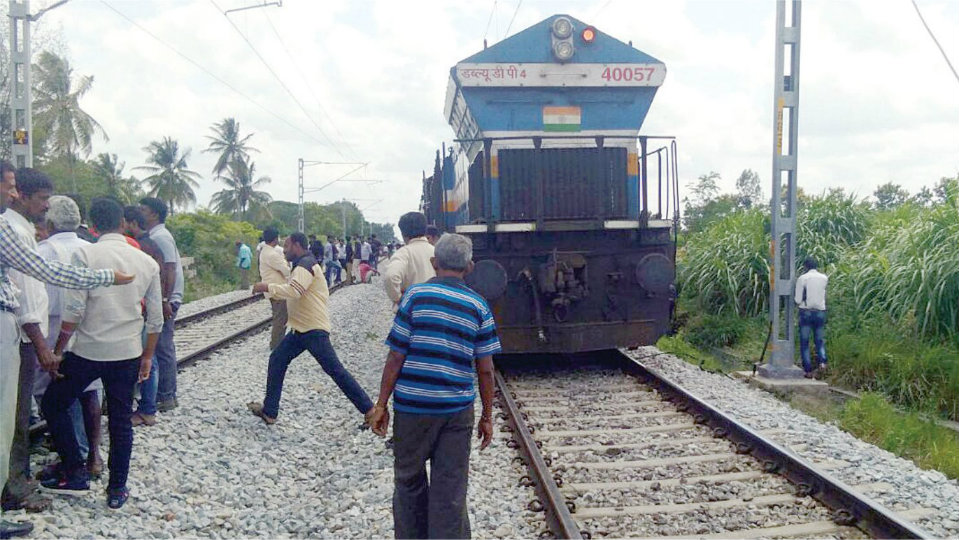 Mandya: Train services from Mysuru to Bengaluru were affected for nearly two hours yesterday afternoon after the Tipu Express hit two buffaloes. The incident occurred between Mandya and Hanakere Stations.

The train, with over 1,000 passengers, was heading to Bengaluru when it hit the buffaloes, Railway officials said. The incident occurred at 12.10 pm and the incident damaged the steam pipe of the train. The train’s air compressor (main component of the braking system) was also damaged. Officials said that a herd of buffaloes crossed the tracks as the train was speeding. Tipu Express leaves  Mysuru at 11.30 am.

Officials said that as soon as the buffaloes were spotted crossing the tracks, the loco pilot applied brakes suddenly and the train came to a screeching halt. While one buffalo was caught under the bogies, the other was seriously injured.

Railway officials from Mandya and Mysuru rushed to the spot and cleared the carcass from the tracks. The train was stopped for nearly two hours at the spot, they said. Railway engineers tried to repair the compressor but in vain. Finally, after they said the locomotive was not fit for further journey, officials summoned a replacement engine and the train resumed its journey at 2.30 pm. The movement of other trains from Bengaluru and Mysuru was not affected as they used the other track.

Tipu Express
Women Beware! Chain-snatchers have come from Solapur
Kurubarahalli Sy. No. 4 and Alanahalli Sy. No. 41 ‘B Kharab’ land row: DC’s report to be finalised in a week