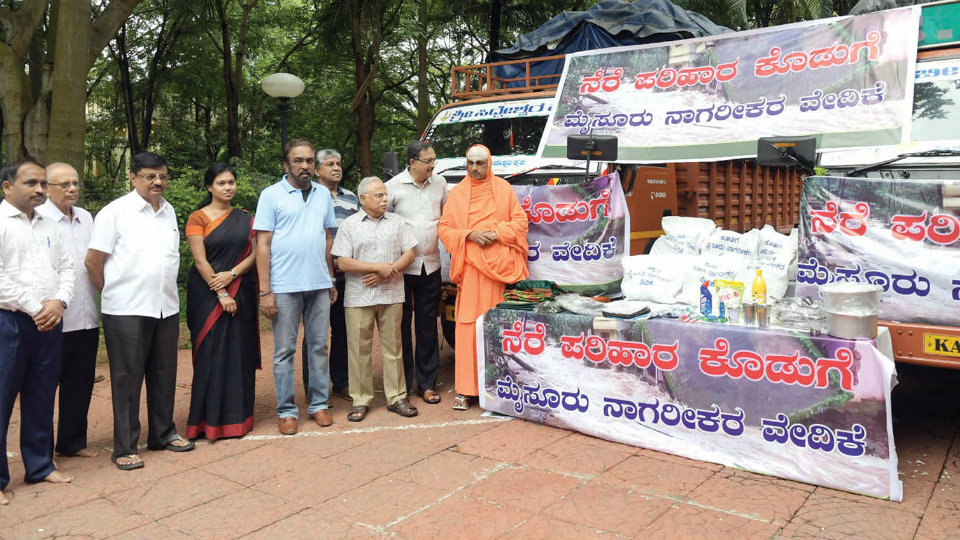 Mysore:  Mysuru Citizens Forum (MCF) dispatched two truckloads of essential items like clothing, dress materials, blankets, toiletries, vessels and detergents worth Rs. 20 lakh to flood victims at Gadag and Bagalkot districts this morning from the premises of Suttur Mutt at the foot of Chamundi Hill here.

Gracing the occasion, Suttur Seer Sri Shivarathri Deshikendra Swamiji said that the DCs and NGOs of the said two districts were contacted to know the relief items needed and accordingly they were sent today. He further said that the requirements in the flood hit areas in Belagavi Yadgir and Mysuru districts would be obtained and relief materials would be sent soon. He added that the Forum proposed to send Rs. 1 crore to CM’s relief fund.

“Officers should complete collection of details of damages caused owing to floods in the district which should be compiled and report sent to the Government soon” said District In-charge Secretary Dr. Kalpana. She was addressing a progress review meeting regarding flood relief measures take in the district held at Cauvery Auditorium at KRS in Srirangapatna  taluk yesterday.

Kalpana asked officials to personally visit the affected areas and get an estimate to repair the damaged roads and bridges which can be sanctioned by the government.

DC Abhiram G. Sankar said that four persons had died in the district during the recent rain and flood and added that a compensation cheque of Rs.5 lakh each has been given to each of the four families. He further said that details regarding collapse of houses in Hunsur and H.D. Kote would be readied in two or three days and expected the compensation amount to affected families to touch Rs.12 crore to Rs. 15 crore.

The DC explained that owing to increased discharge from reservoirs to Cauvery and Kapila rivers, Parts of Nanjangud and Suttur Srikshetra were badly inundated. He added that the breach in Rampura Canal had submerged the life irrigation system in Alambur. He recalled that excess inflow to Kabini reservoir had necessitated to increase the discharge to 1.20 lakh cuses from Aug. 9 to 11 and added that Taraka Reservoir which got filled up after 20 years too added to the discharge into Kapila River.

The DC said that 35 relief centres were opened for flood victims in the district together with four shelters for cattle in Nanjangud and T. Narasipur and added that the housed people returned to their villages after the floods receded. He explained that about 5,000 hectares of agricultural land has been damaged in floods mostly tobacco crop in Hunsur and horticulture crops    in Nanjangud.

Department of Health and Family Welfare has deployed 11 Health Teams to flood hit areas to create awareness among people on cleanliness to prevent outbreak of epidemics Rs.1 lakh has been provided per km of road to repair the damages and Rs.40 lakh is needed to repair lakes in Hunsur, said the DC and asked the officials to expedite the repair works on bridges.