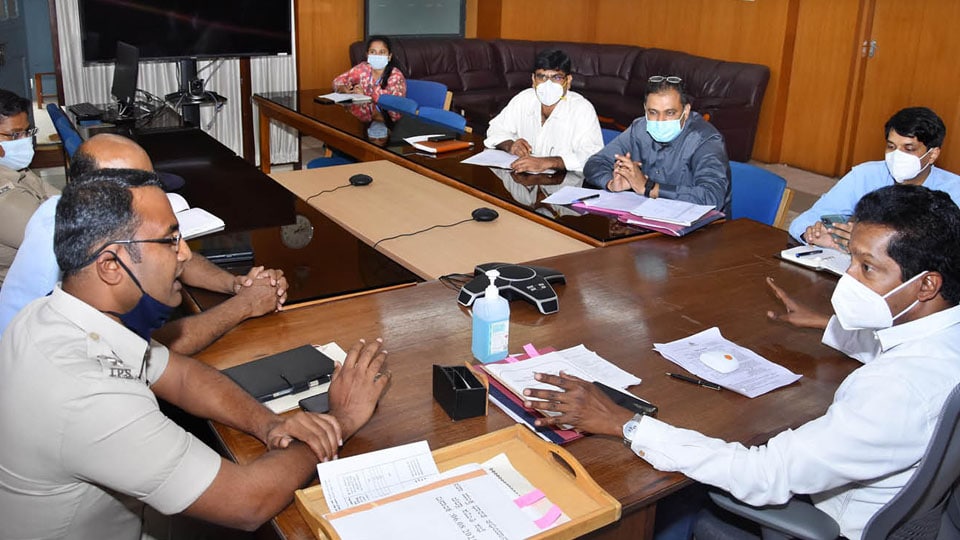 Mysore/Mysuru: In the wake of the Government granting permission for a simple Ganesha festival due to COVID-19 crisis, Mysuru Deputy Commissioner (DC) Dr. Bagadi Gautham has asked the officials concerned to ensure that all Government SOPs are followed strictly during the festival.

He addressed the officials at a meeting held at his Office on Tuesday on the measures to be taken for ensuring that norms are not violated during the celebrations at homes or public places.

Noting that Ganesha idols of height not exceeding 4 ft. can be installed at public places and idols of not more than 2 ft. height at homes and other private places, Dr.Gautham said that Ganeshotsava Samithis and Mandals should take prior permission from local authorities and all concerned Departments.

Cultural programmes like music, dance and such other entertainments will not be allowed during Ganeshotsava, he said and asked the devotees to mandatorily wear mask, maintain physical distancing  of at least 6 ft.and use hand sanitisers.

Continuing, the DC said that public celebrations must not create hurdle for vehicle movement and all norms must be followed during idol immersion. The idols installed at homes must be immersed at homes itself and  those installed at public and private open spaces must be taken to immersion tanks or mobile water tanks set up specifically by the MCC, the District Administration, local bodies and Karnataka State Pollution Control Board (KSPCB ) for immersion, via the nearest routes, sans any procession or large gathering, he noted.

Meanwhile, the District Administration has appealed people to install only eco-friendly Ganesha idols. In a press release, Additional DC Dr. B.S. Manjunathaswamy said that KSPCB has imposed a ban on use of POP (Plaster of Paris) and pigment coloured idols.

Highlighting that rivers and other water bodies get polluted due to immersion of such idols,he reminded that the KSPCB, taking into account the hazardous effects that POP and pigment coloured idols would cause to water bodies, had in the past launched a campaign for using eco-friendly idols made of wheat flour mixed with turmeric powder or ragi flour.

Pointing out that the District Administration has launched “Arishina Putta Ganapathi Poojisona, COVID Nivaaranegaagi Parisara Snehi Habba Aacharisona”(Let us worship a small turmeric idol of Ganesha and celebrate an eco-friendly festival for driving out COVID-19) campaign, Dr. Manjunathaswamy said that as a promotion of this campaign, the members of the public can upload photographs of  turmeric  Ganesha idols made by them in: kspcb.karnataka.gov.in, YouTube @kspcbkarnataka, facebook @kspcbofficial, Twitter @karnatakakspcb and Instagram: kspcb_official  portals from 6 am on Sept.8 till 6 pm on Sept.10.