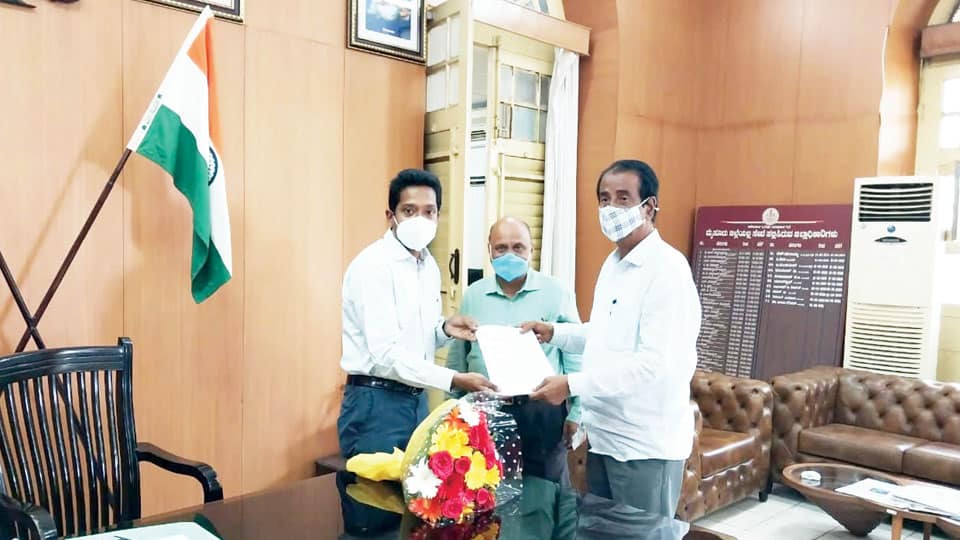 Mysore/Mysuru: The Mysore Industries Association (MIA), representing Micro, Small, Medium Enterprises (MSME) and Large Scale Industries of Mysuru, Mandya and Chamarajanagar districts, has urged the State Government to reduce Property Tax on industrial sites, a move that will go a long way in sustaining the industries which are already facing a tough time after the COVID pandemic.

In a memorandum submitted to Mysuru Deputy Commissioner Dr. Bagadi Gautham, MIA President and former MLA Vasu and MSME Secretary Suresh Kumar Jain said that the Property Tax reduction will truly reflect the ‘ease of business’ policy claimed by the Government and it will improve the investment climate in Karnataka.

In the memorandum, the stakeholders have noted that Hootagalli Gram Panchayat has been upgraded as a City Municipal Council (CMC) last year to include many industrial areas of Mysuru such as Koorgalli, Hootagalli village, Hebbal Industrial Area, Belavadi and Hinkal. These are the areas where most of the MSMEs and large industries are located in Mysuru belt.

But the Hootagalli CMC, comprising the core industrial areas of Mysuru, has announced a Property Tax rate for industries that is the highest in Karnataka. “This is a retrograde step and the current tax slab goes against the Government policy of bringing a separate and a lower Property Tax slab for industries below the commercial slab,” the memorandum stated.

The Karnataka Cabinet had decided to amend Municipal laws to create a separate slab of Property Tax for industries and industrial areas. Taxing industries separately was a demand from various industry bodies as they argued that the Property Tax currently being levied at commercial rates is very high.

As per the Government policy, there must be a separate Property Tax slab for industries and industrial areas developed by the Karnataka Industrial Areas Development Board (KIADB) and the Karnataka State Small Industries Development Corporation (KSSIDC) coming under Municipal limits.

Even the Chief Minister had proposed a separate Property Tax slab for industries in the 2021-22 Budget to encourage more industries. But the tax rates levied by Hootagalli CMC will surely discourage industries and many of them will close. Already due to the COVID pandemic and increased raw material costs, 30 percent of the MSMEs have shut shop.

“Industries are unfairly targeted with the highest Property Tax slabs. A tax rate of Rs. 2 per sq.ft is paid by large industries; medium scale units pay Rs. 1.50 per sq.ft and small scale units pay Re. 1 per sq.ft. In comparison, the tax rate for commercial properties is 80 paise per sq.ft and residential properties pay 50 paise per sq.ft,” the memorandum stated.  In addition, Rs. 4,000 per acre has to be paid to KIADB as maintenance charge in addition to a fee for building plan approval from KIADB and the local municipality.

The stakeholders said that though the Hootagalli CMC was quick to collect maximum taxes, the industrial areas are not maintained well. This is because the industrial estates developed by the KIADB and KSSIDC have not been handed over to the Hootagalli CMC. The State Government had earlier proposed an Industrial Township Authority with a single-window system for taxation, but it is yet to be implemented, the memorandum stated.

The stakeholders have demanded that till the Industrial Township Authority is constituted, 70 percent of the taxes collected must be spent on the development of industrial areas at Hootagalli and Nanjangud CMC.