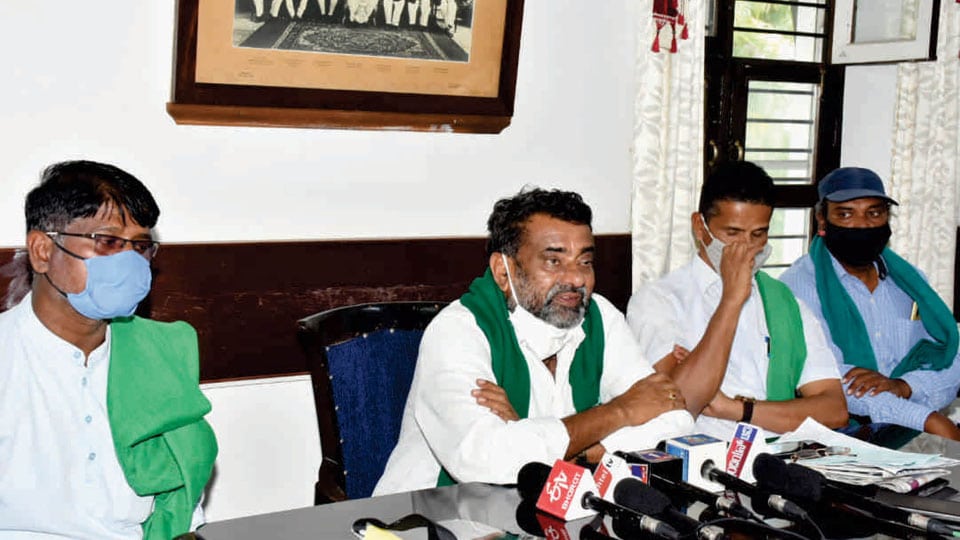 Mysore/Mysuru: Stiffly opposing the implementation of the Mysuru-Kushalnagar four-lane, 93-km National Highway (NH) parallel to the existing NH-275 that connects Mysuru and Kushalnagar, the Karnataka Rajya Raitha Sangha (KRRS) has questioned the ‘self-interest’ of Mysuru-Kodagu MP Pratap Simha in the project.

The NH will start from Bramhapura between Paschima-vahini and Naguvanahalli near Srirangapatna and end at Anekadu near Kushalnagar. It will link the Mysuru-Bengaluru Highway that is being expanded to a 10-lane Expressway.

Addressing a press conference at Pathrakarthara Bhavan in city yesterday, KRRS State President Badagalapura Nagendra said that at a time when farmers are suffering from land loss due to various development projects and at a time when tobacco farmers of Mysuru region are facing severe distress, their elected MP is hell-bent on bringing in more highways. “What is Pratap Simha’s personal interest in the project,” he questioned.

Nagendra said that the MP had directed the National Highways Authority of India (NHAI) officials to speedily acquire land owned by farmers and escalate the work on the construction of the NH. “Ideally, being a representative of the people, Pratap Simha should have discussed the plight of farmers who will lose their lands for the highway. He is least bothered about the farmers and has never raised his voice against the injustice meted out to them in the name of development,” he said.

“This Highway project is a threat to the environment. As the MP is a strong advocate of the project, we suspect him having self-interest in it. We suspect there is commission involved in the road work. Instead of widening the existing NH-275, an entirely new project has been taken up and this was unnecessary as over 1,200 acres of fertile land will be acquired for the project,” he charged.

The KRRS leader said that it was unfortunate that Pratap Simha, who claimed to be hailing from the farming community, had failed to support the farmers. We will hold State-wide protests if the Government does not drop its decision to acquire fertile agricultural land for the road project,” he said.

The Government must pay Rs. 3 crore per acre as compensation to farmers who lose land and jobs must be provided to one of the family members; once the road is completed, toll must not be levied from farmers, he demanded.

9 COMMENTS ON THIS POST To “Mysuru-Kushalnagar four-lane highway – What is MP’s personal interest here: KRRS”