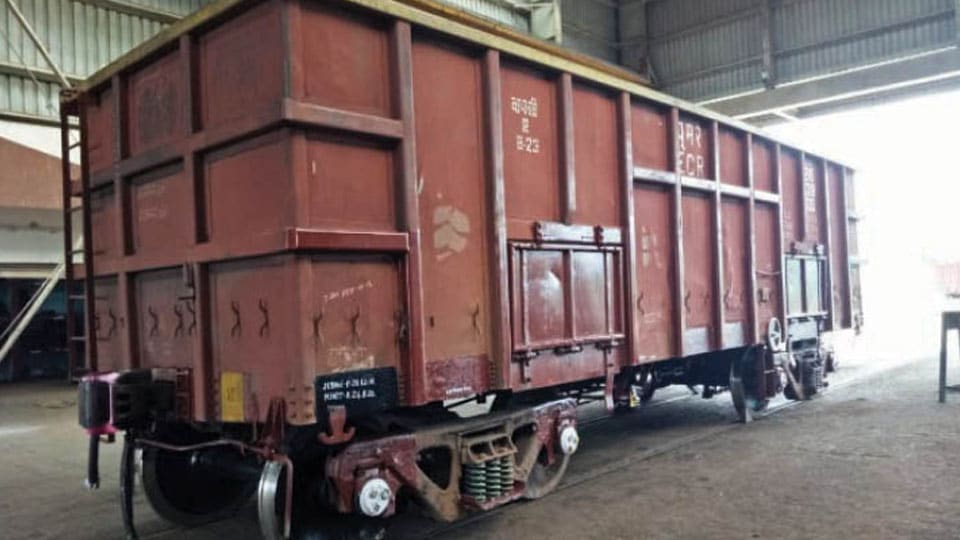 MNGT had the capacity for Routine Overhauling of 30 wagons in a month; Now, after successfully taking up this new challenge, capacity has been increased to 50 per month.

Mysore/Mysuru: Mysuru New Goods Terminal (MNGT) Wagon Depot of South Western Railway (SWR), Mysuru Division, carries out Routine Overhaul (ROH) of BOXN type wagons for the first time. MNGT had the capacity for Routine Overhauling of 30 wagons in a month; Now, after successfully taking up this new challenge, capacity has been increased to 50 per month.

In a first, the wagon depot carried out the ROH of the high-sided open wagon used for transportation of coal and ores (BOXN) in August, 2020 and in the process, became the only second ROH point on SWR after Hospet.

In the changing dynamics of high-quality maintenance practices, the wagon depot at the MNGT has risen to the challenge to liquidate the overdue coaches.

BOXN wagons on the Indian Railway system are used for transportation of over 60% (approximately 650 million tonnes) of the total freight traffic annually and as such keeping them in fine fettle, by following standard maintenance practices, is very critical.

‘Wagon Turn Round’ (WTR), which represents the average period in which a particular wagon completes its average loaded trip and after which it again becomes available for loading), is one of the important efficiency indices of the Railways and therefore the lesser the WTR, the better is the performance of the Railways.

In this context, rolling out of BOXN wagons after ROH schedule in the stipulated time-frame of 3-4 weeks is an uphill task but the wagon depot has transformed this challenge into an opportunity.

Despite several limitations, the wagon depot successfully carried out the ROH of the first BOXN wagon in August 2020 through meticulous planning and optimal utilisation of manpower.

The wagon depot has already completed ROH of three BOXN wagons, fully meeting the statutory maintenance regimen by procuring spares from the adjacent ROH points and more importantly by sharing the intricacies of the processes and procedures involved with the established ROH points.

SWR principally deals with bulk transportation of loose commodities like iron ore and coal in BOXN wagons and the demand for supply of wagons of this type is always high. Therefore, the new facility created at the wagon depot of the MNGT is all set to play a major role in attending to the ROH schedules in a strict timeline.

The resolute spirit shown by the entire team in accepting this and showing success in an unchartered area, in a short time is highly commendable and is another step in Divisional self reliance, according to a press release from Priya Shetty, Divisional Commercial Manager and PRO.