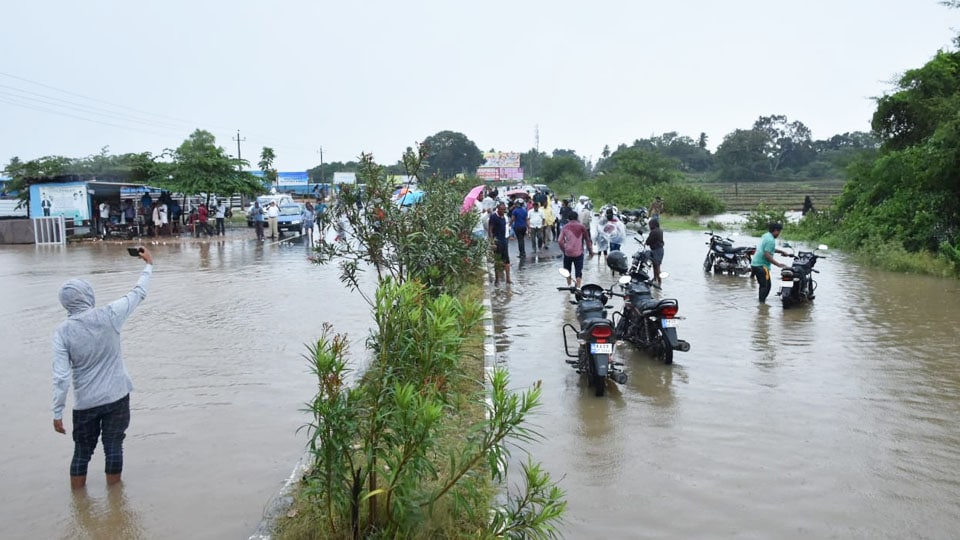 Mysuru: A day after the floodgates were opened at Kabini reservoir, National Highway-766 connecting Tamil Nadu and Kerala via Nanjangud was blocked near Mallanamoole Mutt this morning, as a result of overflowing Kapila.

More than 1,25,000 cusecs of water was released to the river through Kabini owing to heavy rainfall in the catchment area. Sources said more water could be released later in the day.

The road between Mallanamoole Mutt and the South India Paper Mill has been blocked and there is over four to five feet of water on the Highway. The bridge across Kapila near Suttur village too is submerged cutting off the link between Mysuru-Hosakote and Suttur.

Traffic from Mysuru side to Nanjangud has been diverted to Varuna, Kuppegala and Taayur to reach Nanjangud while vehicles coming from Gundlupet are diverted towards Hullahalli Circle and Hejjege to reach Mysuru.

Mysuru Deputy Commissioner Abhiram G. Sankar, SP C.B. Ryshyanth, Nanjangud Tahsildar Mahesh Kumar visited the spot to assess the situation. Nanjangud MLA Harshavardhan has also been camping in the town and monitoring the relief work along with the officials.

Meanwhile, people living in  low lying areas in Nanjangud town were shifted to a relief camp at Girija Kalyana Bhavan next to Srikanteshwara Temple.

This apart, Swamy Ayyappa Temple, Sri Chamundeshwari Temple, Parashurama Temple and Bathing Point located on the banks of Kapila have also been submerged. About 50 houses in the town are said to have collapsed owing to heavy rainfall.

Heavy rains in Wayanad in Kerala and the overflowing of Moolehole River has affected the vehicular movement between Gundlupet in Karnataka and Sulthan Bathery in Kerala passing through Bandipur. According to sources, efforts are being made to divert the vehicles, stranded at the Maddur Range check post, via alternative routes.

Meanwhile, KSRTC has stopped plying buses to Kerala from Mysuru as H.D. Kote has been cut off. However, alternative road has been identified but it is difficult for the buses to ply. KSRTC has stopped bus services to Mangaluru via Madikeri as NH-275 has been blocked.