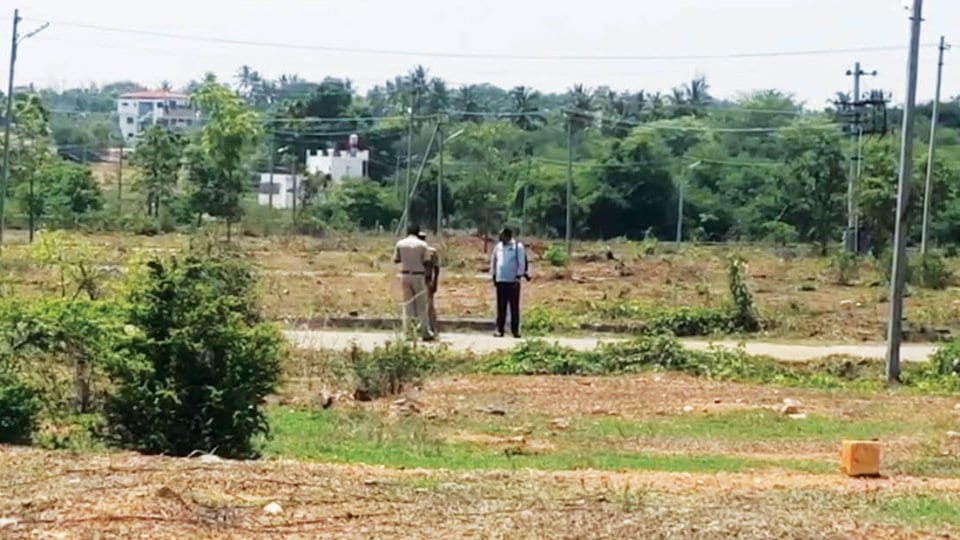 Mysore: Two days after the gang-rape of a woman at Lingambudhipalya, the Kuvempunagar Police have taken over the probe from the District Police. The crime was reported on May 9 where the woman was allegedly gang-raped by four men in a drunken stupor on the night of May 8.

Though there was a doubt about the Police jurisdiction during initial investigation, in the interest of investigation, the Jayapura Police had registered a gang-rape case and had formed eight teams to hunt for the perpetrators. Before committing the crime, the gang brutally assaulted the woman’s friend Shivasiddappa and broke one of his legs. They assaulted him with lethal weapons and the victim is recuperating at K.R. Hospital.

City Police Commissioner K.T. Balakrishna told Star of Mysore that the Kuvempunagar Police will investigate the case as the Jayapura Police, coming under Mysuru Rural subdivision, has transferred the case to the City Commissionerate yesterday.

Jayapura Police had filed an application in the District and Sessions Court, where heinous crimes (where the period of sentence in the case of conviction will be seven years and above) are heard. The District Police had contended that the scene of crime at Lingambudhi Palya near Lingambudhi Lake comes under the jurisdiction of Kuvempunagar Police limits.

Hearing the application, the Court passed the order directing the city Police to take up the investigation. An order to this effect has been received at the Commissioner’s Office and they have taken up the case, Balakrishna said.

Police said that the Kuvempunagar Police have already swung into action and have formed teams to nab the rapists. Some persons are being questioned and reliable sources said that there will be a breakthrough soon. Police have intensified the investigation and are tracing the Call Details Records (CDR) of the victims and are tracing phone numbers based on cell phone tower location at the time of the incident.

Meanwhile, Shivasiddappa, who was attacked with a boulder, sustained a fracture in his leg. He underwent a surgery yesterday and apart from the fracture, he has sustained lacerations on some parts of the body but his condition is stable said K.R. Hospital doctors.

Following the incident, the city Police have launched ‘Operation Ring Road’ to clamp down on those drinking in public. Police sources said that teams have stepped up patrolling along the peripheral areas to put brakes on illegal activities including drinking in open spaces.

Areas along the Outer Ring Road and open spaces such as parks and deserted roads in these localities have become a haven for people to consume alcohol. Police said that many youngsters are often spotted drinking in such spaces after dark.

Police said that people choose such places to avoid paying extra money for liquor in bars and restaurants. Apart from creating a public nuisance, these people trouble pedestrians. After drinking, they discard bottles at those places and some even break them on the roads in a drunken state. “We will put an end to all such activities,” Police said.