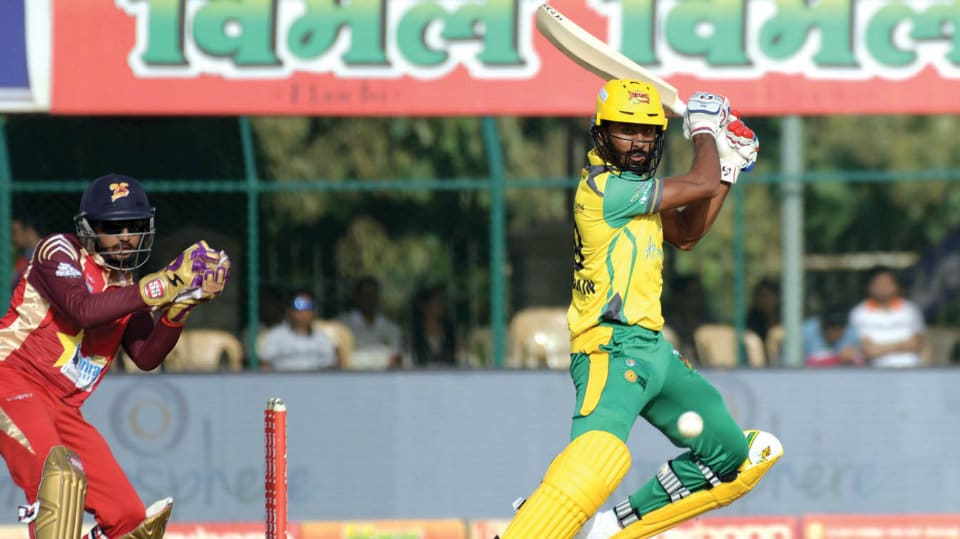 In a closely contested match, Bengaluru Blasters managed to hold on to their nerves as they defeated Mysuru Warriors by two runs in the ongoing Karnataka Premier League (KPL) – 2018 encounter at SDNR Wadiyar Stadium in city yesterday.

Earlier, Mysuru Warriors won the toss and put the table toppers Bengaluru Blasters into bat. The Blasters got off to a horrific star as they slumped to 24 for 3 within 3 overs. N.P. Bhareth (2 for 25) and Prateek Jain (1 for 17) were getting a lot of movement with the new ball and caused concerns to the batsmen.

Pavan Deshpande (76 n.o) and Robin Uthappa (34) anchored the drowning ship and steadied the innings. Pavan Deshpande 76 (54b,7×4,2×6) paced his innings perfectly and carried his bat till the end. He was also well supported by Vineet Yadav (30). The Blasters posted a competitive total of 148 for 4 in 20 overs. 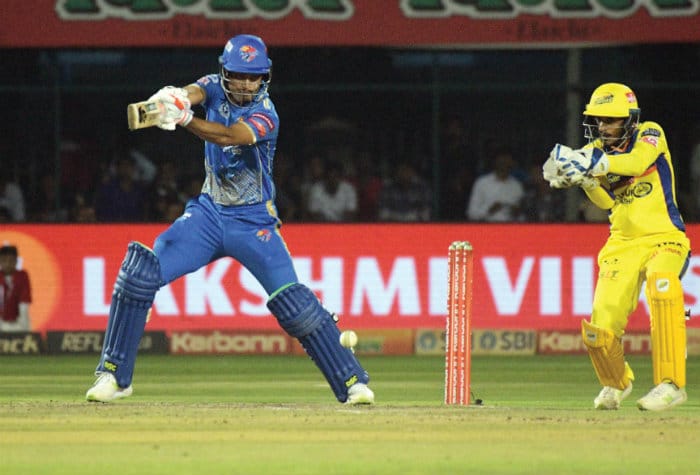 Man of the Match Pavan Deshpande of Bengaluru Blaster in action.

In reply, Mysuru Warriors’ top order collapsed. The Warriors who mainly rely on their top order batting force were all of a sudden reduced to 54 for 5 in 8.2 overs. Wicket keeper-Batsman Srinivas Sharath (37) showed some respite and paved a path for the team to get back in the chase. With 34 runs needed of the last three overs, the crowd was shaping itself into another cliffhanger. S.P. Manjunath (34 n.o.) and Bhareth (12) seemed to take Mysuru all the way home with their aggressive batting style. But substitute fielder Azeem Ghatankar pulled off a well timed catch that was sailing for six and ended Bhareth’s cameo which came off 5 balls.

Manjunath 34 n.o. (24b, 4×4,1×6) carried the match onto the last over. With two wickets in hand, Mysuru Warriors required 11 off the last over. The dismissal of Vyshak Vijaykumar swayed the game back into the favour of Bengaluru Balsters. With four required off the last ball, the big hitting Manjunath found himself at the wrong end as Prateek Jain could manage only a single. Mysuru Warriors finished the innings at 146 for 9 in 20 Overs.

This exciting encounter was the much awaited match as the stands were swelling with fans all around. The nail-biting finish had the fans at the edge of their seats until the last ball.

Bijapur Bulls who were playing for a third spot finish in points table, defeated Shivamogga Lions by two wickets in the KPL encounter at SDNR Wadiyar Stadium in city yesterday.

After winning the toss, Bijapur Bulls put the opposition into bat. Shivamogga Lions, who had lost all their previous four matches, were playing for pride. The Lions once again got off to a poor start as they were reduced to 46 for 4 in less then 7 overs. None of the top order batsman could carry his bat through the innings. K.P. Apanna’s spell (4 for 21) cast a web around the top order as they fell prey to him. Adhoksh Hegde (42) and Aditya Somanna (37) resurrected the innings. The Lions managed to post a total of 140 for 9 in 20 overs.

In reply, Captain of Bijapur Bulls, Bharath Chipli (43) got the momentum going in the right direction for the team after his opening partner M.G. Naveen was caught of the first ball of the run chase. Chipli went berserk right from the word go. He seemed like he carried his fine touch from his previous match against Mysuru Warriors.

Bharath Chipli 43 (18b,8×4,1×6). He along with Kaunian Abbas (51) shared a 62 run stand for the second wicket off 37 balls. Chilli’s explosive innings came to end after Aditya Somanna pulled off a stunning catch at long on. His dismissal led to a collapse as none of the other batsmen got a decent start. Kaunian Abbas kept the score ticking ahead with his gritty knock. But he was soon dismissed after he notched up his half century. With 29 required off the last 5 overs, the Lions thought they were back in game. The game went on to the last over, where 4 runs were required of 2 balls. Suneel Raju hit Abilash Shetty for a huge six over extra cover and sealed the game. The Bulls finished at 143 for 8 in 20 overs.