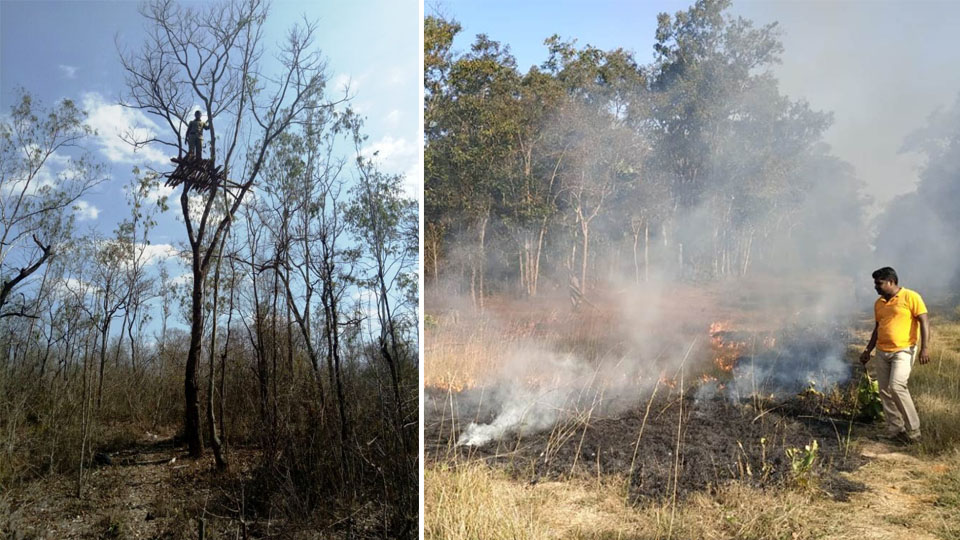 Hanagodu/Mysuru: The efforts of Forest Department officials and staff in taking measures to prevent forest fires at Nagarahole Tiger Reserve has paid with rich dividends. As there were no forest fire incidents, the National Park has earned a ‘zero fire spot’ tag.

Since 10 years, there have been incidents of forest fires at various zones in the Reserve, destroying large swathes of land along with wild animals, flora and fauna. This year, however, using modern equipment and technology, the Forest Department employees have been working relentlessly and were successful in preventing forest fires.

Learning lessons from the large fire that had engulfed parts of Bandipur last year and from the fire incidents at Nagarahole every year, the officials and staff also sought co-operation from tribals and local villagers on the fringes of forests to control forest fires.

As 200.47 sq. km buffer zone area now comes under Nagarahole Reserve Forest, the forest is now 843.47 sq. km and it had become a challenge to the staff to prevent forest fires in the additional areas.

Fire lines play a major role in the prevention of spreading of forest fire and hence creating of fire lines was undertaken since December 2019. While some fire lines are 10 metres wide at some places, 20 metres wide fire lines have been created at some other places.

To create 2,677 km fire line, more than 400 tribals, who are experienced in fire extinguishing, were appointed as Watchers and the Forest officials provided them good food and handsome money for their work. Also, Forest officials and staff had made jungles their home leaving behind their families from January till March. All these resulted in zero forest fire incidents.

Preventing forest fires is one of the major tasks for the Forest officials and staff for which various preventive steps and use of various technologies is required. The Department created awareness on the dangers of forest fires and importance of forests through street plays, posters and rallies in villages along the fringes, created fire lines in all eight zones and necessary practical training was given to the staff and others on preventing fire.

Quick Response Vehicles were used at all zones, used water sprayers, water tank facility and modern fire-dousing equipment were used and as a back-up, fire-extinguishing vehicles were stationed at many zones. Drone cameras and video cameras were used to keep overarching vigil. The Department was also ready to use a chopper if necessary to prevent and control fires.

Mahesh Kumar, Director, Project Tiger, Nagarahole Tiger Reserve said, “We feel proud to say that because of the awareness created about the importance of forests among villagers in forest borders, co-operation from all including officials and staff, there was not a single fire incident at Nagarahole.”