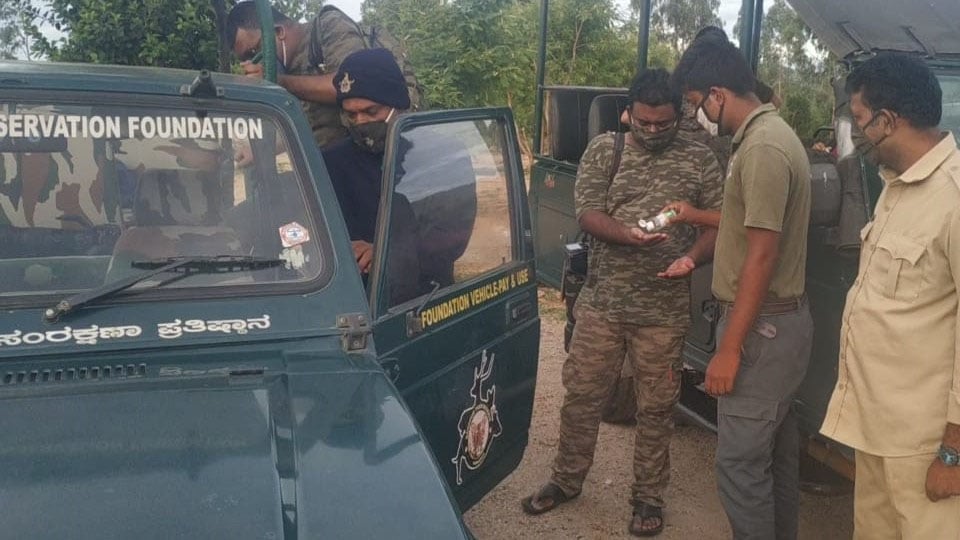 Mysore/Mysuru: Safaris at Bandipur Tiger Reserve and Nagarahole National Park have resumed today after a gap of 75 days. While there were no safaris early in the morning due to lack of visitors, officials were seen preparing for noon, afternoon and evening slots.

Before the wildlife enthusiasts were allowed inside the safari jeeps, they were asked to wear masks and their hands were sanitised. Assistant Conservator of Forests Ravi Kumar and Range Forest Officer Naveen Kumar of Gopalaswamy Range supervised the arrangements at Melukamanahalli Gate in Bandipur this morning.

Reports from Bandipur said that for the noon safari, only 11 people had come. Forest Officers inspected the sign boards where detailed guidelines have been printed and displayed.

At Nagarahole Tiger Reserve too, there were no morning safaris. Ledgers and vehicles were being prepared for evening trips.

Apart from jeeps, in Bandipur and Nagarahole, buses too will be used for safaris but social distancing norms will be strictly followed, an official said.