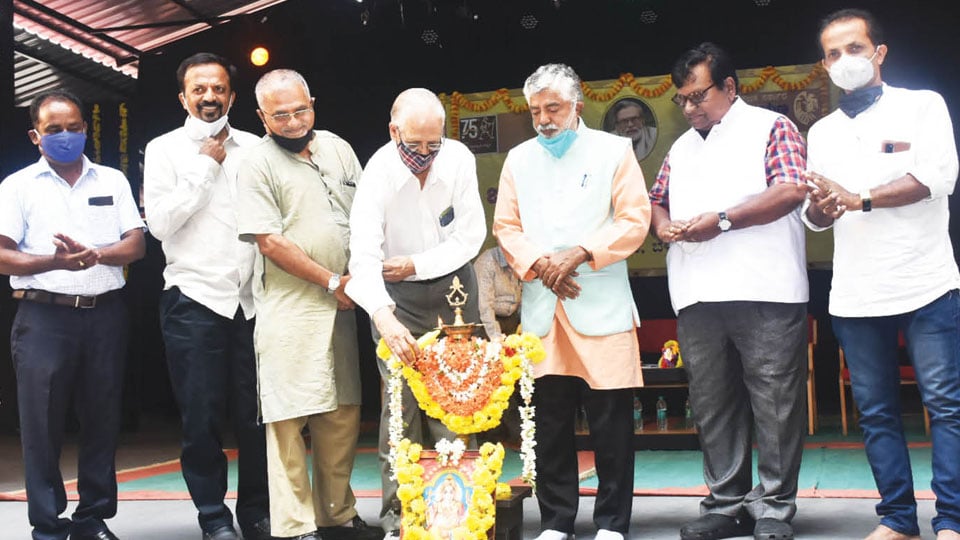 Mysore/Mysuru: Asserting that he would not rest until the road running in front of Rangayana gate (road linking Hunsur Road with Kukkarahalli Lake) is named after theatre great B.V. Karanth, Rangayana Mysuru Director Addanda C. Cariappa said that several representations have been made to the Government in this regard.

He was delivering the keynote address of the inauguration of’ ‘B.V. Karanth Ranga Chavadi’ at Rangayana premises here this morning.

Highlighting the pains taken by ‘Ranga Bhishma’ B.V. Karanth for building Rangayana in Mysuru, Cariappa said that the Government should take serious note of the demand and name the road running in front of Rangayana gate after B.V. Karanth.

Pointing out that it has also been planned to install a bust of B.V. Karanth in Rangayana premises marking the theatre great’s birthday later this year, he expressed disappointment over the absence of Minister S.T. Somashekar who  was supposed to inaugurate the ‘B.V. Karanth Ranga Chavadi.’

Explaining the highlights of B.V. Karanth Ranga Chavadi, Cariappa said that it was built at an hitherto unused space as an additional platform for staging plays, especially by Ranga Shikshana students and other art performances.

Noting that it was earlier planned to build a Theatre Museum at this space but the idea did not come off as it required crores of rupees, Cariappa said that the B.V. Karanth Ranga Chavadi was built at a cost of Rs. 8 lakh with generous donation from donors and own funds of Rangayana.

He also lauded the support extended by senior theatre promoter of Mysuru, Jayaram Patil, for the construction of Ranga Chavadi.

Stating that Chamaraja MLA L. Nagendra has promised Rs. 5 lakh out of his MLA fund for Rangayana’s activities, he said that the MLA should allot at least Rs. 10 lakh for the purpose.

Underlining the hardship that Rangayana underwent in the past one and half year following the outbreak of the deadly COVID -19 pandemic last year, Cariappa said that prior to the COVID outbreak, the Government used to announce an annual grant of Rs. 4 crore every year for Mysuru Rangayana. But this grant has come down to a mere Rs. 60 lakh in the post-COVID times, which has left wondering Rangayana how to pay even monthly wages for artistes and staff, who are over 70 in number, he bemoaned.

Recalling his association with ‘Ranga Bhishma’ as B.V. Karanth was popularly known, Prof. Pradhan Gurudatta said that he and Karanth have together watched many plays and art performances at many places.

Pointing out that B.V. Karanth used to often say that learning is a never ending process, he said that Karanth used to analyse each and every play for its speciality or newness.

Terming B.V. Karanth as a rare personality with exceptional talent, Prof. Gurudatta said that Karanth’s contribution for the growth of Rangayana will ever remain etched in the minds of people.

Opining that Rangayana had remained stagnant over the years, he said that Addanda C. Cariappa has given a new touch to it by carrying out relentless activities despite the hardships caused by the deadly pandemic.

He also highlighted the efforts made by Cariappa in staging Dr. S.L. Bhyrappa’s play ‘Parva’ in a very well-organised manner, just as film-maker B.R. Chopra succeeded in bringing the great epic Mahabharat on Television screens. The Rangayana Director also ensured that Parva reached out even to the common man through the staging of the play in a lucid manner, he added.

Artistes T.V. Suresh of Ponnampet and Devendra, who were entrusted with the construction  of B.V. Karanth Ranga Chavadi, were honoured on the occasion.