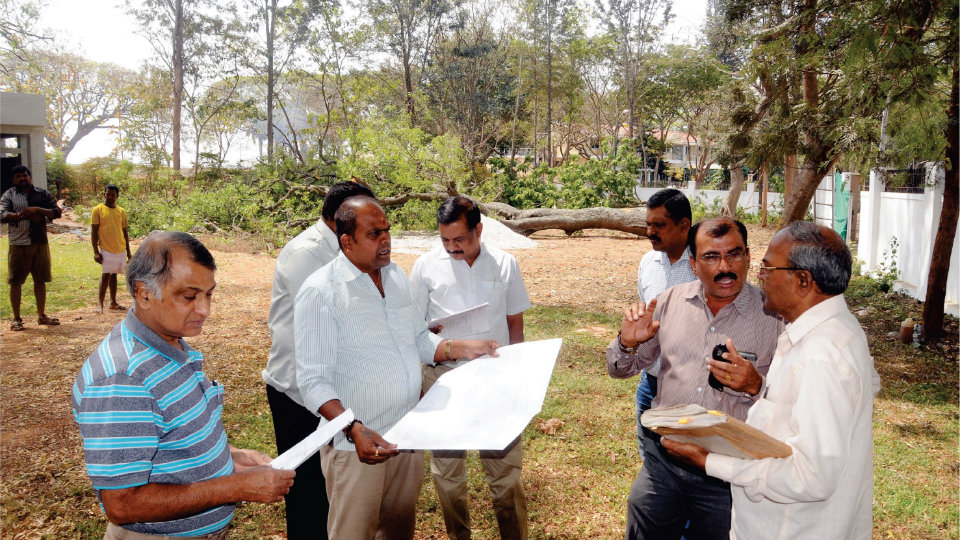 The officials of National Highways (NH), led by Executive Engineer Krishnamurthy, fell two of the many huge trees grown inside the Ursu Gymkhana Club, adjacent to Mysore Race Club (MRC) with the help of Nazarbad Police in city this morning leading to tension between the officials and members of the Club.

The trees were marked to be felled for the widening on National Highway-212. But the members and office-bearers of the Club claimed that no notice was served before felling the trees and claimed that the trees were grown inside the Club premises which is a private property.

Meanwhile, Ursu Gymkhana Club Secretary Balachandra Urs told SOM that the land in which the Club is housed is registered under Ursu Gymkhana Club’s name in 1972 and added that all taxes have been paid and the documents were in the name of the Club.

He said that the Club on Jan. 1, 2017 had approached the High Court and had filed a writ petition (No. 4334/2017) requesting to stay felling of trees inside the Club premises and added that the High Court on Feb. 1, 2017, issued a stay order in this regard.

Balachandra Urs said that when he showed the order to NH official, they said that it was not an order but just a petition and did not bother to look at it properly.

He said that if he along with others had not reached on time, the NH officials would have felled more trees and added that they were not opposed against the felling of trees but everything has to come from proper channel with correct documents.

The NH officials later left the spot after the office-bearers of the Club insisted them to produce documents and also issue a notice to them.