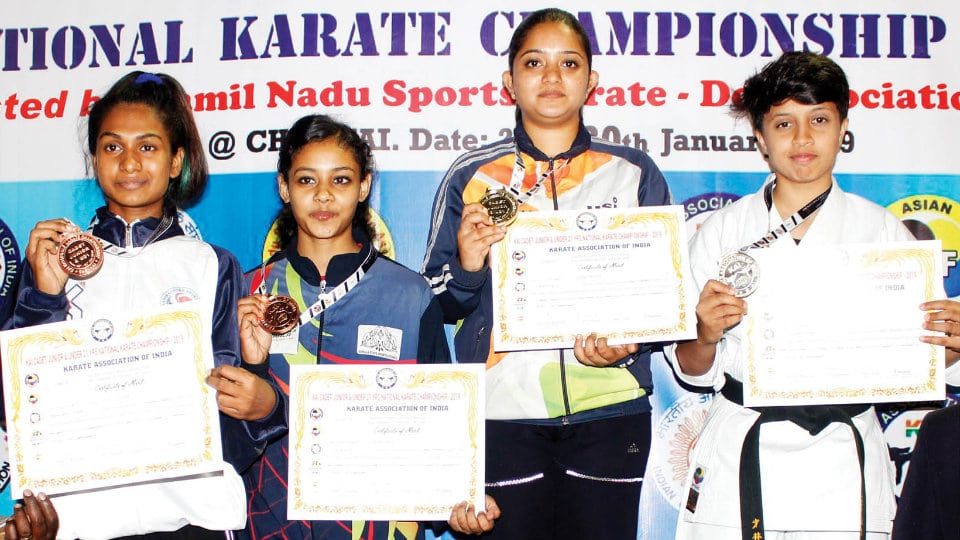 Karate Association of India (KAI), the National Federation for Sports Karate in India, which is by Indian Olympic Association, had Cadet, Junior and U-21 National Karate Championships at J.J. Indoor Stadium, Kilpauk, Chennai, from Jan.28 to 31. Around 600 Karatekas from across India took part in this prestigious Championship.

The Championship was inaugurated by KAI President Shihan Karate , Chairman of Bodukan Karate India Suman, Vice-President of KAI Shihan C.S. Arun Machaiah, KAI RC Chairman, Shihan Paramjeeth Singh and host of Senior Masters. For the first time, the championship was in the new 2019 WKF Kata Rules (Point System); the total number of participants (20) were divided into two (Aka &Ao) groups. The contestants had to perform two Katas in two rounds and points would be awarded for each round performed, and the topper in each group of two rounds would automatically qualify directly for the finals to fight for gold and silver medals, and the next best two toppers in each group would fight for the two remaining bronze medals.

City’s Karateka, 2nd PUC student of VVS GJ PU College, Kuvempunagar and State No.1 Deia Urs, who took part in the U-21 individual female kata category, topped her group (Ao) by securing 24.42 points in the first round and 24.50 points in the second round of to qualify for the finals directly. Priyanka of Tamil Nadu topped the other group (Aka) by securing 25.12 and 23.80 points respectively to enter the finals.

But, in the finals, Deia Urs eventually lost to Priyanka by a margin of 0.3 points and had to settle for medal. Deia Urs scored 23.90 in the ultimate round, while Priyanka of Tamil Nadu scored 24.20 to win the gold. Siddhi Gharu of Maharashtra and Farshana of Kerala took the remaining bronze medals.

Deia, who has 3rd Degree KAI Black Belt, is the daughter of Roopa Urs and is trained by her father B.S. Srinath Urs, a certified and accredited National Karate Coach and are affiliated headed by ShihanTiagarajan and All India ShitoRyu Union headed by Shihan C.S. Arun Machiah.