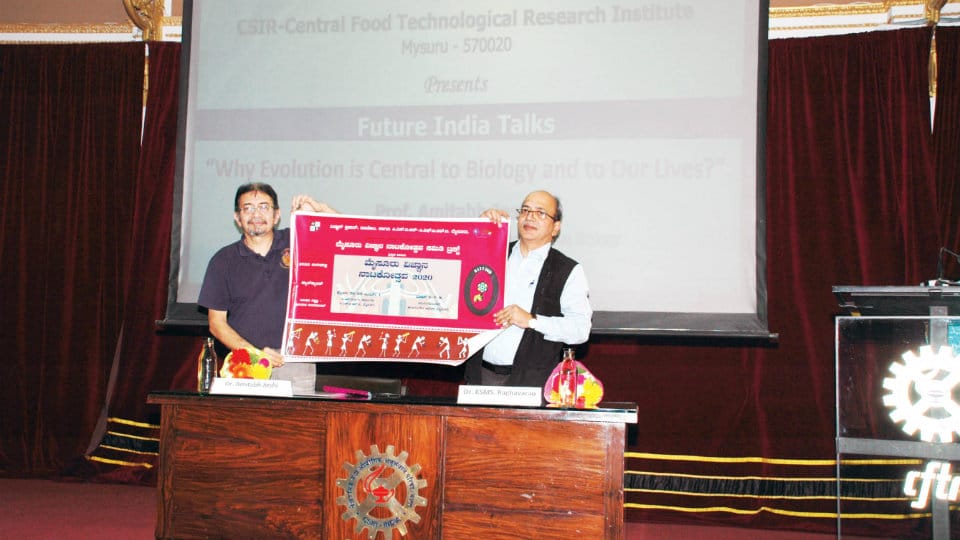 Mysore/Mysuru: As part of National Science Day (Feb. 28) celebrations, CSIR-CFTRI, in association with Mysuru Vijnana Natakotsava Samithi Trust, has organised a three-day Kannada Theatre festival from Feb. 28 to Mar. 1. The festival will be held at its IFTTC Auditorium.

A poster of the festival was released by Dr. KSMS Raghavarao, Director, CSIR-CFTRI and guest speaker Dr. Amitabh Joshi, Professor and Head, Evolutionary and Organismal Biology, JNCASR, Bengaluru, at the valedictory of the ‘Future Talk lecture series’ held at CFTRI here yesterday. The theatre fest will feature an exhibition of portraits of scientists and a half-day symposium on ‘Science Fiction and Science in the Folklore.’

Thus spake  Dr. Amitabh Joshi: Many say that evolution is a theory and is not proved.  This is because of the confusion between two meanings of the word theory. For commoners, theory means that which is a speculation. For scientists, a theory is a proven concept.  In that sense, evolution is a proven concept. Nearly half of the researches in evolutionary biology today is contributed by Indians. Half of the well-known names today in Evolutionary Biology research are also of Indians. There are several Indians who have attained international fame and they have all worked in India.

Almost all precepts that Charles Darwin proposed have been proved experimentally by Experimental biologists. The only issue that today’s biology does not agree with Darwin is that evolution is slow and gradual.  Experiments have shown that it could be otherwise too. Evolution is not a branch of biology: it is the logical framework within which we view all biological facts, coming from the various sub-disciplines of biology. Medicine, psychology, agriculture and other fields have now come to view their problems through the lens of evolution. For example, drug resistance which is a huge social problem is also a problem of evolution.  Evolutionary understanding can tell us better how and why a virus causes disease.