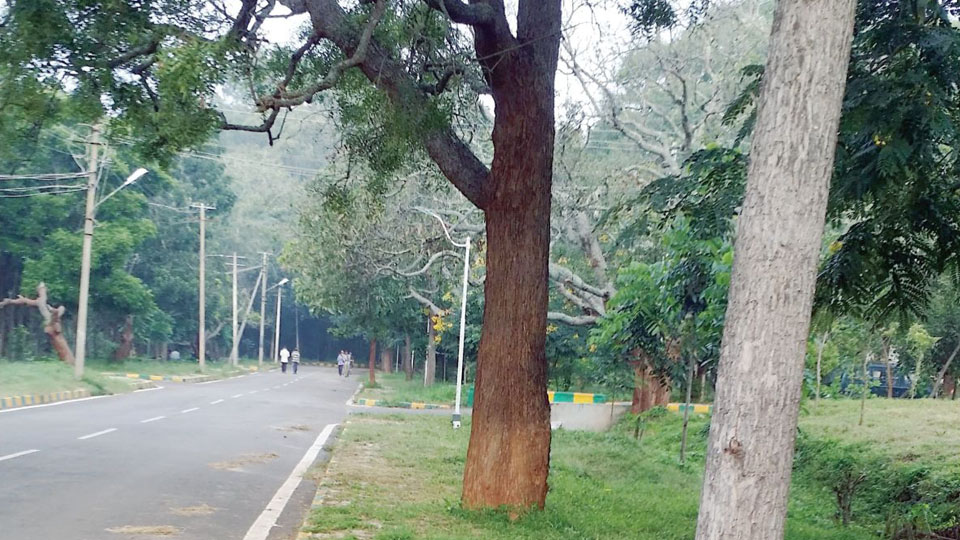 The Manasagangothri campus had a rare and specific image of its own for long. In early seventies as students we were thrilled to be part of the campus.  It never occurred to us that it needed some beautification to make us proud. Large shady trees in the sprawling campus with its own narrow walk paths winding through in innumerable trees gave us a sense of being in the lap of mother nature. The entire area was very quiet yet very busy academically.

The Mysore University authorities in their own wisdom thought of giving the campus a touch of modernity by laying cement inter-locking bricks on either side of many roads to facilitate walkers on the footpath.  A good thought if implemented and maintained well to serve the purpose for which huge amounts  from Government grants were obviously spent.

Diverse opinions were expressed about the need for such walk paths. Well, nevertheless concrete blocks were laid. Please see the state in which they are now. The accompanying picture speaks for itself.  It is an apology for beautification and appears like an unwanted scar on the face.

Any visitor, local or foreign, will certainly raise his  eyebrows about the purpose for which it was executed. If it had to have a mat of grass on it,  well you could have left it untouched.  At least there was earth beneath it. The  campus has litters of used paper bags, heaps of garbage left by party makers. Even the “Nobel Laureates” path is not spared.

Just the huge gates and the loitering uniformed guards do not add any stature. A serious, committed and continuous care is  the need of the day.  Any kind of disregard to the campus is an insult. Therefore, may we hope that the authorities responsible will look at these aspects and make it worthy of its name.

READ ALSO  Brandenburg Gate in 1975: Down the memory lane