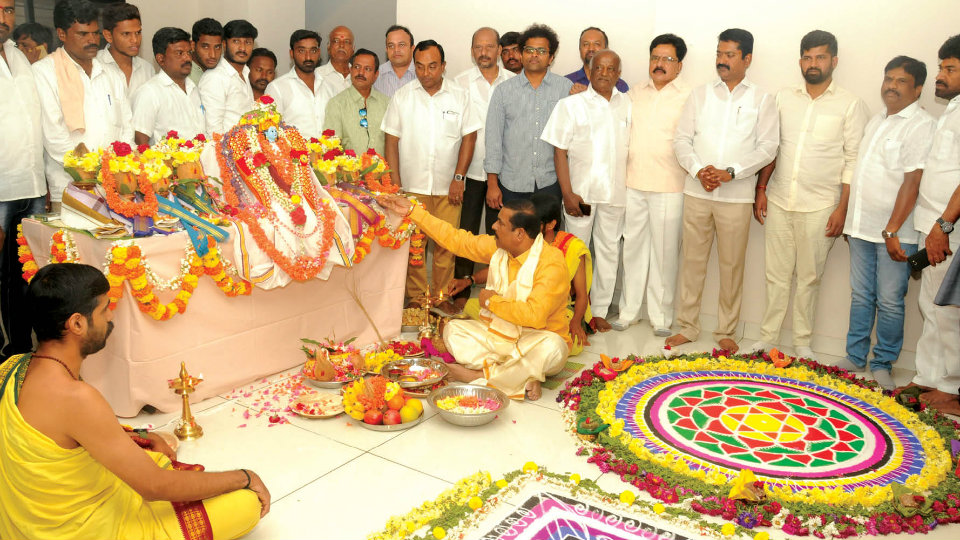 Mysuru:  The new BJP Office at Chamarajapuram in city was inaugurated this morning.

Activities of District and City BJP units and other party related activities will take place in this office here onwards.

State BJP Secretary and hotelier M. Rajendra has constructed this office building in the name of his son Sachin Rajendra, in his own land at the total cost of Rs 6 crore. He handed over the keys of the building to District BJP unit after performing all pujas and rituals today.

Senior BJP leader and former MLC Thontadarya appreciated the rare gesture of Rajendra for donating this building to the party to conduct party activities.

He said that BJP was founded 38 years ago. The party had won three seats in all the three city Assembly segments in 1994 polls.  It had also won Parliamentary polls thrice in 1998, 2004 and 2014. The long pending demand of party for a permanent party building office was fulfilled by Rajendra, he added

BJP will retain power at the Centre; Simha

Speaking to reporters after visiting the new party office this morning, Member of Parliament Pratap Simha said that the party will come back to power under the leadership of Prime Minister Narendra Modi after Lok Sabha polls.

He exuded confidence that people will seek the mandate on the basis of development works done by NDA government and previous BJP government in the State.

“Moreover, the party has ‘Modi vote Bank’ as like other parties have their own vote bank. People will vote for Modi in the next Lok Sabha election too “, he said.

The opening of the new party office in the headquarters of the city will help to conduct more events to boost the morale of party rank and file.

Replying to a query on Chief Minister H.D. Kumaraswamy at the Manjunatha Temple in Dharmasthala, Dakshina Kannada, said he’d retire from politics if the audio clip he released on Friday turned out to be fabricated, Pratap Simha said that CM must speak with conscience instead of resorting to cheap politics like truth test at Manjunatha temple. CM should introspect before issuing such statements.

He set aside the Kumaraswamy’s allegations of the audio clip of BJP leader B.S. Yeddyurappa allegedly trying to influence JD(S) Gurmitkal MLA Naganagouda Kandakur was false.  He said that people across the State, party leaders craving for Yeddyurappa to become next Chief Minister in the State. District BJP President Kote M.Shivanna, BJP leaders Phaneesh and others were present.