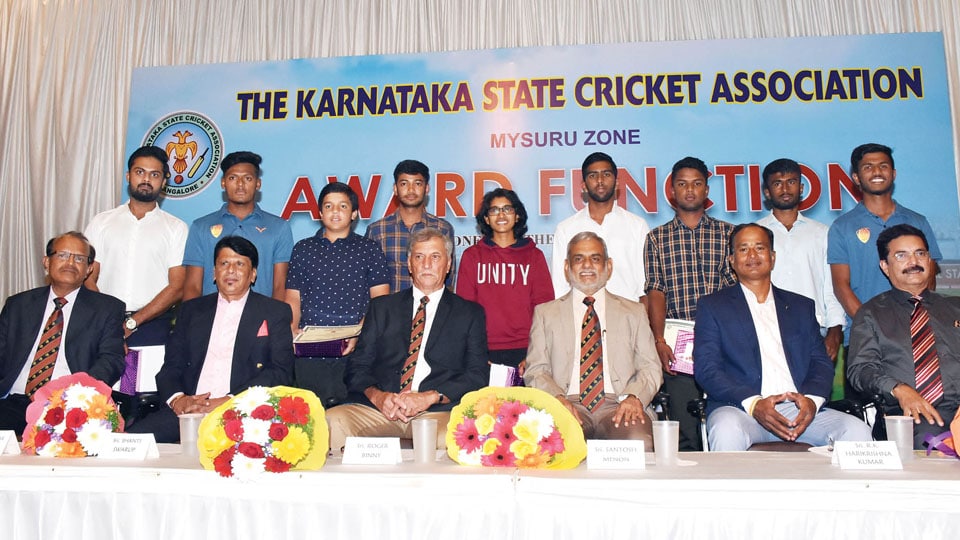 He was speaking at the award function organised by KSCA, Mysuru Zone, to honour young cricketers who excelled in tournaments conducted during 2019-2020, at Nithyotsava Hall near Ballal Circle in city yesterday.

Menon said, “Mysuru Zone did not have a place of its own. So, 20 acres of land has been spotted on Ring Road where state-of-the-art cricket stadium would be constructed. Talks were on with the State Government in this regard. The KSCA was first in the country to hold domestic matches at a time when COVID-19 pandemic had shut all sports activities. Mysuru always gets first priority when any cricket tournament was held by the KSCA. This city has had hosted Ranji Tournaments in the past.” All postponed cricket tournaments due to Corona would resume from April, he added.

Roger Binny, former Indian all-rounder, who was the chief guest during the occasion, said that cricket was growing in country and the KSCA has specially identified with Board of Control for Cricket in India (BCCI) to hold cricket tournaments across the State. More and more young cricketers were coming to light because of which Zonal, State, Inter-State and Club-level Cricket Tournaments were held regularly. Mysuru Zone has always been very active, he noted.

“Maintain quality in sports. You can achieve only if you keep-up performance in bowling and batting. There is a lot of difference in playing in nets and on the pitch. Give more importance to training. Net practice must be continuous as stopping it in between may affect your career, Binny advised budding cricketers.

No one had imagined that Border-Gavaskar Trophy cricket series between India and Australia will change after the ‘Men in Blue’ were dismissed for just 36 runs. Defeating Australian team in its home pitch has proved that Indian team can win any overseas cricket series. Players are now playing more games. IPL has changed the very form of cricket. The mindset of players has changed and the game of every player is known to each other. When we went to Australia to play match, we had not seen Australian fast bowler Dennis Lillee at all. We were not playing many tournaments in the past. Now even the pitches have changed. They were finding it difficult to face fast bowlers. The present Indian pacers bowl faster than Down Under bowlers.

I cannot say Australian team is weak as they conduct cricket tournament from school level. There are plenty of good players but may have failed to perform. However, they will bounce back. — Roger Binny