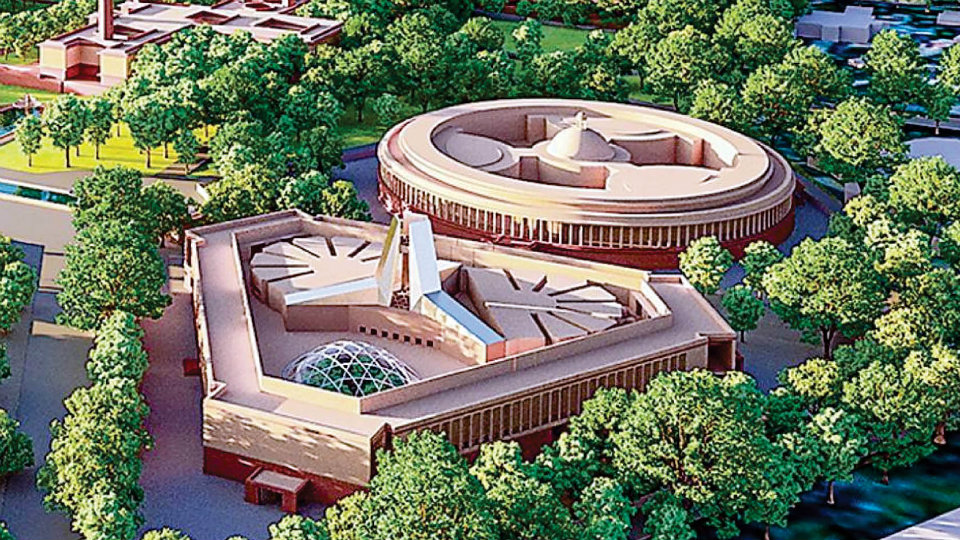 New Delhi: A new Lok Sabha Central Hall big enough to house 900 Members of Parliament (MPs) and flexible enough to house up to 1,350 MPs for a Joint Parliament Session will be the centrepiece of the Central Vista redevelopment plan that has a deadline of 2024.

The new Parliament Complex, which has an earlier deadline, 2022, will be among the first plans to be finalised and tendered out, perhaps in the first half of this year itself. The current design of an evolving plan envisages a triangular complex, with tricoloured beam lighting up the sky overhead. And at a more mundane level, the MPs will sit comfortably in broad two-seater benches, accessible from either side so that no one will have to squeeze through — and which can, when a joint session is held, accommodate three.

The redevelopment will also see North and South Block, which house Ministries, becoming Museums; the creation of a Central Secretariat and a redesigned Rajpath.

PM’s residence to be shifted: According to presentations made by the Ahmedabad-based HCP Design, the new triangular Parliament building will come up next to the existing complex, the Indira Gandhi National Centre of Arts will be relocated with some of the new Government buildings coming up where it is located and the National Archives will be remodelled. The Prime Minister’s residence will be shifted behind the existing South Block Complex while the residence of the Vice President will move behind North Block.

First off the blocks will be the new Parliament Complex and the Government Offices at Indira Gandhi National Centre for the Arts Regional Centre. The former will come up on 13 acres within the existing Parliament Complex. And it will be much bigger than the current one, where the Lok Sabha Hall simply can’t fit any more MPs. And there may soon be a need to.

Barring a Constitutional Amendment, India will revisit a decision on the size of the Lok Sabha in 2026. Political scientists Milan Vaishnav and Jamie Hintson projected that the Lok Sabha may need to have 848 members by 2026 to keep the spirit of proportional representation. Accordingly, the new Complex is aimed to house 900 MPs. In December 2019, former President Pranab Mukherjee called for almost doubling the strength of the Lok Sabha to 1,000 lawmakers from the current 545.

According to Bimal Patel, the architect in charge of the redesign of Central Vista, the plan is to also create a separate lounge. Currently, the Central Hall functions as one, although it is not designed for the purpose. There may even be office space for MPs.

The current plan, according to Patel, “the Lok Sabha, Rajya Sabha and an open-to-sky courtyard around which there would be a lounge and in the middle there will be a foyer.” The offices will be along the periphery of the building. Patel and his team studied seating arrangements in Parliaments of several countries including Cuba, Egypt, Singapore and Germany. MPs have often complained of lack of space, especially during Joint Sessions.

There’s no space to be had in the current Lok Sabha. There are even seats “behind columns”, Patel said. A Parliamentarian gets around 40cm by 50 cm of space to sit in the House now. This will increase to 60 by 60 under the new arrangement.

The shape of the present circular building, designed by architects Edwin Lutyens and Herbert Baker in 1912-13, was based on the Chausath Yogini temple, one of the oldest heritage sites in India. The big question is the fate of the 92-year-old Parliament building.