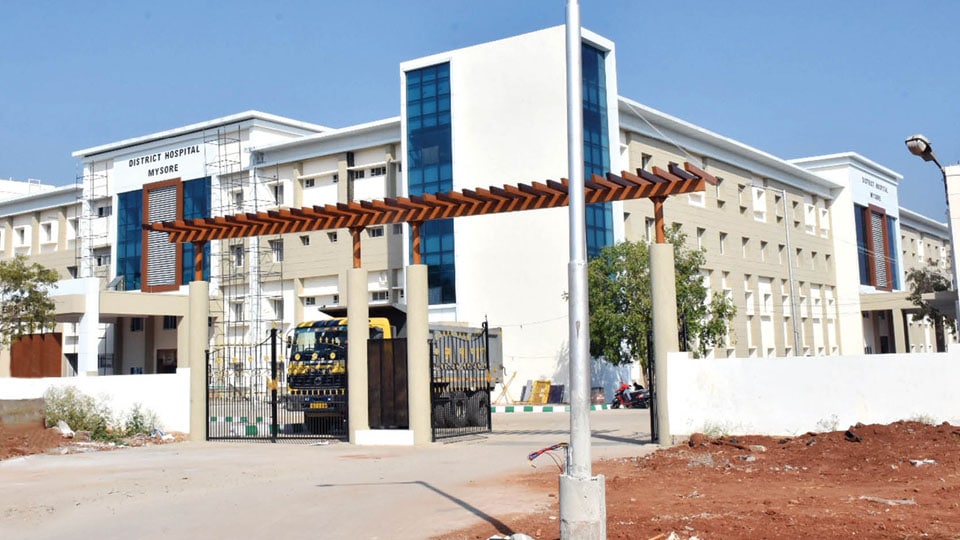 Mysuru: State Health Minister B. Sriramulu will inaugurate the newly-built District Hospital in ED Hospital premises on KRS Road in city at 4 pm on Jan.23.

Announcing this at a press meet at the new Hospital building this morning, Chamaraja MLA L. Nagendra said that only the building will be inaugurated and the Hospital will become functional in another two months after necessary medical equipment and furniture are installed and the medical staff, including paramedics are recruited.

Stating that the District Hospital is a 250-bed Hospital, constructed at a cost of Rs. 75.32 crore, he said that

Bengaluru-based Star Builders and Developers, who was awarded the contract, started works on June 29, 2017 and all the civil works are complete now.

The five-floor structure including basement and ground floor has a total built-up area of 20,969.30 sq.mts and will house a women and child section at basement, an Out-Patient Department at Ground Floor, Urology, Neurology, ENT, ICUs, Special Wards, General Wards, Dialysis, Dentistry and other departments at the first floor, Library, Laboratory, Blood Bank, major Operation Theatres, Wards etc., at the second floor and Rehabilitation Centre, Laboratory, VIP Wards, Major OTs, Burns Ward etc. at the third floor, Nagendra said and added that almost all medical facilities will be available at this new Hospital.

Noting that the District Hospital is expected to considerably ease the pressure on K.R. and Cheluvamba Hospitals in city centre, he said that a proposal has been sent to the Government for upgradation of K.R. Hospital. Also, the works on the construction of a Trauma Centre and Super-Speciality Hospital in PKTB premises is nearing completion, the MLA said and added that a proposal has been sent on improving road connectivity and development of other infrastructure around the Hospitals.

He said that District Minister V. Somanna, MLAs S.A. Ramdas, L. Nagendra, MP Pratap Simha and other people’s representatives will be present during the inauguration.