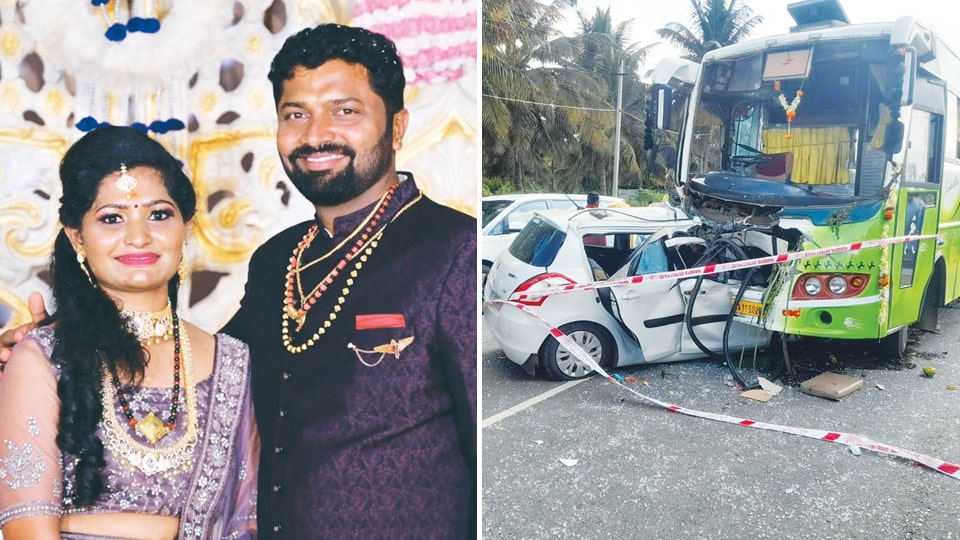 Nagamangala: A newly-wed couple from Kodagu is among three persons of the same family who were killed on the spot in a head-on collision between a car and a private bus near Kempanakoppal Gate in the taluk yesterday afternoon.

The deceased have been identified as Thangamma (65), a retired teacher from Somwarpet in Kodagu and presently residing in Mysuru, her son Sudeep (30) and her daughter-in-law Shreeja (23). Their relative Shreya, who sustained serious injuries, is admitted to Adichunchanagiri Hospital.

Sudeep had married Shreeja of Mullusoge on Dec. 10 and yesterday being Amavasya, the couple along with family had gone to Adichunchanagiri Temple in their car (KA-09-MA-6477). After puja, they were on their way back when a private bus collided head-on with their car.

The impact was such that the trio were killed on the spot and the front portion of the car has been completely mangled.

Nagamangala Dy.SP Naveen Kumar, Rural Sub-Inspector Satish Kumar and staff rushed to the spot and immediately shifted Shreya to hospital. Mandya SP Yatish too visited the spot. It is learnt that the occupants of the bus were from Mandya and were proceeding to Mantralaya. Bus driver and a few passengers have also sustained minor injuries.

The bodies were shifted to Nagamangala Govt. Hospital, where post-mortem was conducted and the bodies were handed over to the family members, according to Police. A case has been registered and investigation is on.