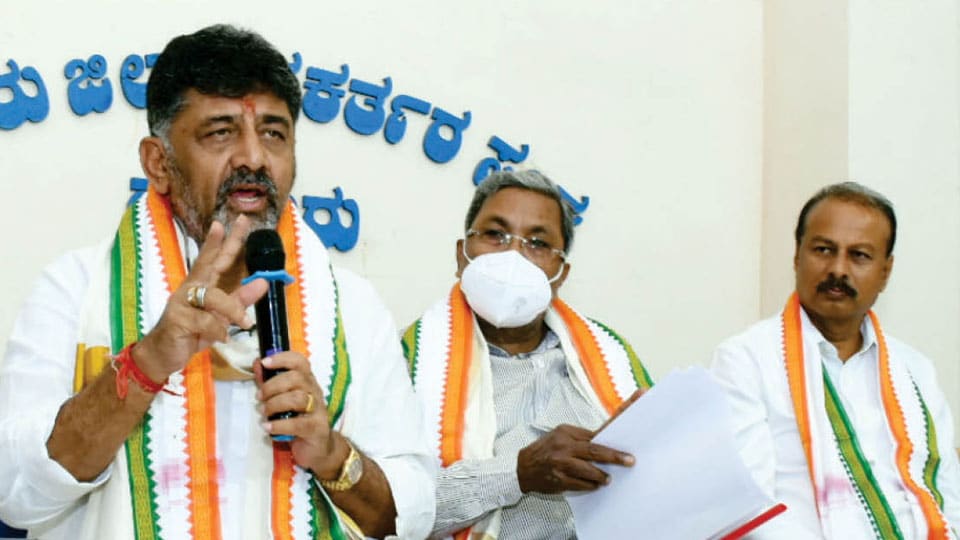 Mysore/Mysuru: Accusing the ruling BJP Government of making all possible attempts to thwart the Congress Party’s Mekedatu Padayatra that is scheduled to start on Jan. 9, KPCC President D.K. Shivakumar alleged that the Government was using COVID lockdown threat to stall the padayatra, fearing its success.

Addressing a joint press meet along with Opposition Leader Siddharamaiah at Patrakartara Bhavan here this morning, Shivakumar slammed Chief Minister Basavaraj Bommai for saying that Bengaluru is likely to be declared as a Red Zone in the wake of rising COVID cases.

Arguing that no lockdown nor declaration of Red Zone is necessary for containing the virus at this stage in Karnataka, the KPCC President thundered that the padayatra would go on as scheduled come what may. He further said that the CM was scared of the huge public response that the Congress is getting for the padayatra.

Charging the BJP Government’s utter failure in governance, Shivakumar claimed that he was alerted by some on the BJP’s plans and ploys to foil the padayatra.

Reiterating that the 10-day padayatra (Jan.9 to 19) would go on as scheduled with all COVID appropriate behaviour in place, he said that the Congress will keep one lakh face masks, sanitisers etc., for use by parti-cipants.

100 doctors to be deployed

Noting that more than a hundred doctors and paramedical staff from the party’s Medical Cell will be deployed during the padayatra, he said that shelters for party workers and others will be set up at necessary points all along 160 km-long padayatra.

Hitting out at BJP for calling the padayatra as a political gimmick, Shivakumar said that one must remember that the DPR for the project was prepared when Siddharamaiah was the Chief Minister. Highlighting the benefits of Medkedatu Water Project, he accused the Centre of stalling the project for the sake of Tamil Nadu. Urging the Centre to give environmental clearance for the project at the earliest, he alleged that the BJP leaders had failed in protecting the interests of the people of Karnataka.

Opposition Leader and former CM Siddharamaiah too came down heavily on the BJP Government for making clandestine efforts to block the padayatra in the name of pandemic.

Recalling that he as Chief Minister in  Oct. 2013, had submitted a feasibility report on Mekedatu Project to the Centre, he said that later on another DPR was prepared and forwarded to the Central Water Commission (CWC), when the BJP Government headed by Narendra Modi came to power.

Subsequently, the CWC sent it back seeking certain clarifications on several salient features of the project. Thereafter, D.K. Shivakumar, who became Water Resources Minister in the JD(S)-Congress coalition Government prepared a Rs.9,000 crore fresh DPR, which the current Union Government is sitting upon it without taking any decision, he maintained.

Dismissing the BJP’s allegations that the padayatra was nothing but a political gimmick, Siddharamaiah asserted that while the Congress and coalition Governments made honest efforts to execute the project, the current BJP Government is unnecessarily dragging its feet, by failing to give environmental and other mandatory clearances.

Charging Tamil Nadu BJP leaders of blocking the project, Siddharamaiah recalled that even the Supreme Court had rejected Tamil Nadu’s petition against the project, saying there was no merit in it.

Explaining the benefits of the project, Siddharamaiah said that the project is purely drinking water projects that benefits over 2.5 crore people of Mysuru, Bengaluru, Chamarajanagar and other districts of Mysuru region. Arguing that Karnataka has every right to utilise its rainfall water to the full extent, the former CM bemoaned that the sluggishness of the BJP Government had resulted in 200 TMC of water in Cauvery basin going waste into the seas.

Pointing out that four dams of Cauvery river — KRS, Hemavathi, Harangi and Kabini  — can together hold 115 TMC of water, he said that with the execution of Mekedatu Project, these dams can hold another 66 TMC of water, which is enough to meet drinking water needs of several districts throughout the year. He further said that the project has the capacity to also generate 400 MW power, that can be supplied to the bordering districts of both the States.

Targeting  BJP Government, Siddharamaiah alleged that the Centre was silent on the project as its leader Annamalai had staged a dharna opposing the project. He also charged Karnataka BJP leader and former Minister C.T. Ravi, who is also Tamil Nadu BJP In-charge, of betraying the interests of Karnataka, for promoting the BJP in Tamil  Nadu.