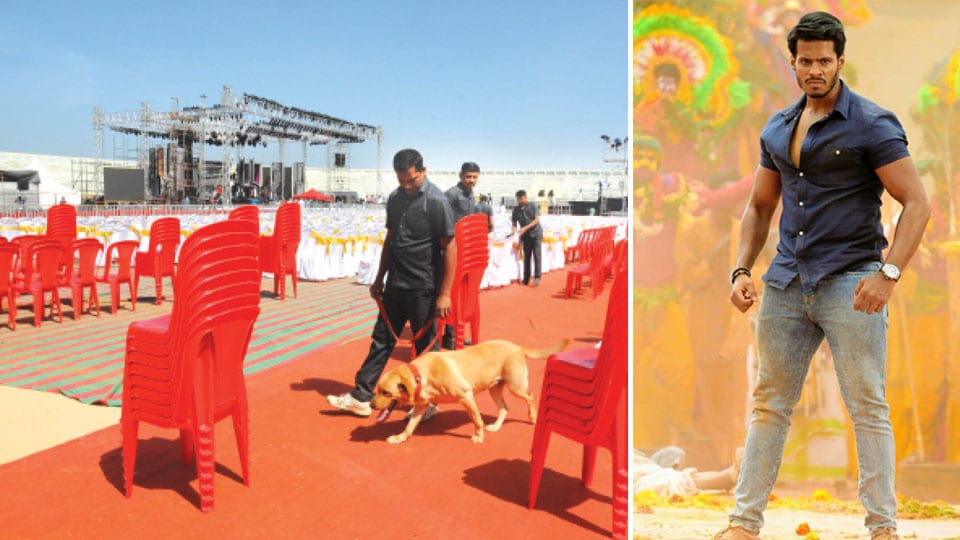 Mysuru: The Torch Light Parade Grounds at Bannimantap in city is all set for the official trailer launch of Kannada movie ‘Seetharama Kalyana’ starring Nikhil Kumaraswamy, son of Chief Minister H.D. Kumaraswamy, in the lead role, today (Jan.19) at 5 pm.

The Chief Minister is expected to arrive in city at 4 pm today. He will be received at Mandakalli Airport, according to Police sources.

Lead pair Nikhil and Rachita Ram will put on power-packed performances to the songs of the movie ‘Seetharama Kalyana’ during the trailer launch ceremony.

Later speaking to media persons, Nikhil said that around one lakh people are likely to turn up for the event from the districts of Mandya, Mysuru, Ramanagaram, Hassan and Tumakuru. Seating arrangements have been made for 75,000 persons.

All efforts have been made to reach out to masses before the movie hits screens across the State on Jan.25.

He said, actors Rachitha Ram, Ragini Dwivedi, Ashika Ranganath, Manvitha, Chikkanna, K.R. Pet Shivaraj and Ravishankar will be part of the entertainment programme this evening. Well-known singer Vijay Prakash and team will present a Musical Nite. He further said that various friends of his father H.D. Kumaraswamy, including MLAs, MPs and other elected representatives, cutting across the party lines, will take part in this non-political event.

Stating that his father had produced family-oriented movies like Chandrachakori, Galate Aliyendaru and Surya Vamsha, Nikhil said that ‘Seetharama Kalyana’ is also a family drama with a message to society.

‘Seetharama Kalyana,’ directed by A. Harsha, is Nikhil’s second movie after his debut, ‘Jaguar.’ With Anup Rubens’ music and J. Swamy’ cinematography, the action-packed family drama will see over 130 artistes sharing screen space.

Being a production venture from the Chief Minister’s home banner Channambika Films, the film’s teaser was launched in Ramanagaram. The film, produced by Anitha Kumaraswamy, will be distributed by Jayanna and Bogendra across 300 theatres in Karnataka.