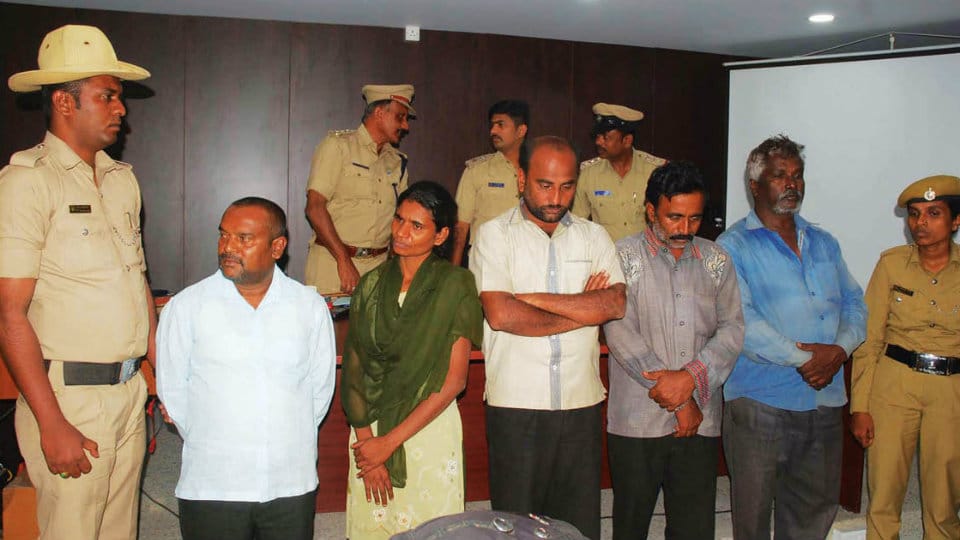 Mandya: The Malavalli Police have arrested five persons including a woman in connection with a kidney racket where a woman had committed suicide recently. 48-year-old Venkatamma of Gangamatha Beedhi had ended her life by jumping into Doddakere in Malavalli town on Jan. 9 and the Police had suspected that she was a victim of the kidney racket.

The arrested have been identified as 28-year-old Tara Nagendra, a resident of Mastammakeri at Malavalli, 46-year-old Dara Gopal alias Kidney Gopal of Shanthi Layout in Ramanagaram, 41-year-old Javaraiah, a snacks seller from Holalu village in Mandya, 49-year-old Raju, a flower seller at Krishnapura in Channapattana and 54-year-old Thimmaiah, a mason from Vijayanagar in Ramanagaram.

Venkatamma was selling greens and vegetables and Tara Nagendra, a neighbour, allegedly convinced Venkatamma to sell her kidney to make quick money. Tara had said that she could earn Rs. 30 lakh by selling a kidney and had also demanded Rs. 3 lakh as commission to look for buyers. Venkatamma, who had some financial problems readily agreed to Tara’s proposal.

At a press conference at his office yesterday, Mandya Superintendent of Police Shivaprakash Devaraj said that Tara influenced Venkatamma to agree for kidney donation without informing her (Venkatamma’s) husband Mallaiah and swindled Rs. 2.80 lakh commission and distributed money to her accomplices.

Investigation revealed that in 2015, Tara had herself sold her kidney and a case was registered in Magadi Police Station against Gopal, Javaraiah, and Raju as the trio had cheated Tara. In 2015, Tara had convinced her sister Jyothi to part with her kidney to earn money. Investigation revealed that Tara this time partnered with Gopal, Javaraiah and Raju and involved Venkatamma in the racket.

The Police have registered a case under IPC Section 420 (cheating and dishonestly inducing delivery of property) and 306 (abetment of suicide). Organ donation, unless authorised by competent body or a committee, is illegal in India and selling organs for money is a punishable offence. If anyone comes across illegal organ donation, they must immediately inform the Police, the Mandya SP said.