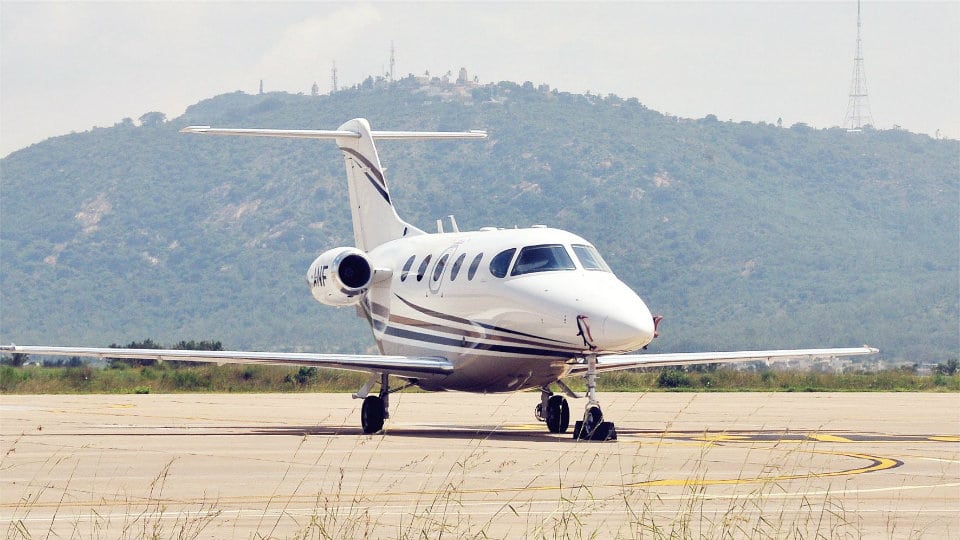 No Air Service this Dasara

Mysuru: Just 21 days for Dasara and here comes a shocker for those who were banking on flight services from Mysuru to Chennai for travelling and business during peak festival season: There will be no flights during Dasara. Reason, the company that came forward to operate flights from September has communicated that they can start flight services only after October 15.

A meeting was on this morning in Bengaluru between Mysore Airport authorities and the flight operating company to sort out the issues and begin flight operations at least by Sept. 15. The final outcome of the meeting will be known only in the evening.

In yet another disappointing news, the ambitious “Akasha Ambari” special flights between Bengaluru and Mysuru during Dasara may not take off as there is no response from the Tourism Department that had earlier launched the facility.

Those who constantly lamented about lack of air connectivity from the Mysore Airport were upbeat when – during July – the Mysore Airport authorities had announced that daily flight operations from Mysuru to Chennai will begin from September and there would be two flights operated by Air Odisha and TruJet.

Bhubaneswar-based Air Odisha (72-seater plane) and Hyderabad-based TruJet (19-seater aircraft) were selected under the first phase of bidding for the Regional Connectivity Scheme (RCS), known as UDAN (Ude Desh ka Aam Nagarik), launched by the Narendra Modi government. Under the scheme, people could reach Chennai in one hour and by paying Rs. 2,500 per seat.

Now, TruJet has expressed its inability to operate flights from Sept. 15, facilitating tourist movement during Dasara. Instead, they have communicated to the Airport authorities that they could start flight operations only after October 15.

Speaking to Star of Mysore this morning, Director of Mysore Airport Manoj Kumar Singh said that he was at the meeting with TruJet authorities. “I have already told them that there would be no use if the service starts after Oct. 15 as the peak Dasara tourism season would be over. Also, by starting services by Sept. 15, the company can capitalise on tourist flow,” he said.

Manoj Kumar Singh added that if the flights start before Dasara, there would be enough publicity and if announcements are made early, there will be more takers to flying between cities.

The meeting was on till we went to the press.

The “Akasha Ambari” Dasara special flight that is launched to cater to Dasara tourists every year may not be operated this year. Mysuru Deputy Commissioner D. Randeep had earlier this month written to the Secretary, Tourism Department, to resume ‘Akasha Ambari’ special flights between Bengaluru and Mysuru, this Dasara. But sources said that so far, the Tourism Department has not replied to his letter.

In his letter, Randeep, who is also the Chairman of Aerodrome Committee, had said that a large number of foreign nationals visit Mysuru during Dasara and the non-availability of air services between Bengaluru and Mysuru is a limiting factor for tourist inflow into the city.

Randeep had also mentioned that last year, the special flight from Bengaluru (HAL Airport) to Mysuru was initiated by Tourism Department and the same flight services were once again required this year to boost  tourism.