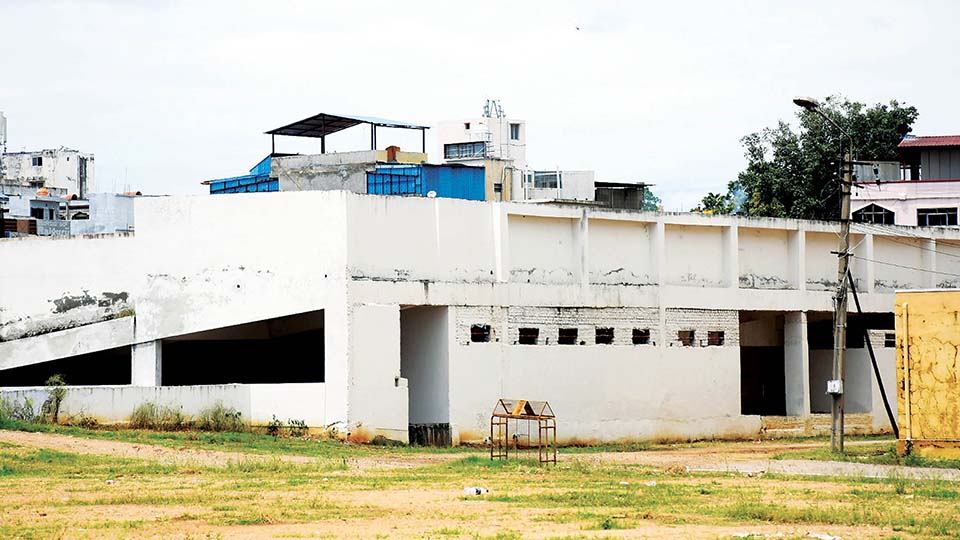 Mysuru:  The Mysuru City Corporation (MCC) has no proposal before it to open the 6,000 sq.ft. multi-level pay-and-park facility at Town Hall temporarily for the public during this Dasara fest. “As of now, there is no such proposal,” MCC Commissioner G. Lakshmikantha Reddy told Star of Mysore.

Parking will not be open as the works that began way back in 2011 have not yet been completed and only after the works are fully done, it will be a full-fledged public parking facility, he added. Sadly, thousands of tourists have arrived in Mysuru for Dasara but every day it is a struggle to park their vehicles. There are 30 percent of pending works amounting to Rs. 4.50 crore and the tender for the works has been approved now. “We have also approved the technical bid and we will send the financial bid to the Deputy Commissioner for approval. After the DC approves the financial bid, a work order will be issued,” the Commissioner stated.

Hyderabad-based Chhabria Associates was given the contract worth Rs. 18.28 crore to construct the parking lot and the ground-breaking ceremony was performed on April 11, 2011. The project was to be completed by April 2012. Though the MCC paid Rs. 12 crore, the contractor moved back to Hyderabad leaving the project in a limbo.

There is a water-logging problem in the underground level of the parking lot. A sump has to be built to collect the gushing rainwater inside the basement parking and pump the water out. The roof-top of the multi-level parking will have an open air theatre and a Ranga Mantapa and the work on this is almost complete.

However, the work on the parking lot where cars will be parked is 70 percent complete but the work on the two-wheeler parking has come to a standstill with just pillars standing and no support walls.

A tough exercise to park

In the past, the MCC had opened the facility for Dasara with a main intention of easing traffic congestion and parking hassles in the Central Business District where people come to witness Dasara programmes. Last year too, the parking lot was not open due to lack of Dasara programmes and Mysuru was under the grip of COVID and this year too, the authorities do not expect much crowds at the city centre.

However, the reality is different as people are struggling to park their vehicles even before the start of the festivities. Now tourists are thronging the city to see the illumination and shopping and they have to go to great lengths to find a place to park. “The D. Devaraj Urs Road, Ashoka Road, Sayyaji Rao Road, Santhepet and surrounding areas are impossible to park and if we had the Town Hall open, we could have parked vehicles there,” said a tourist from Bengaluru.