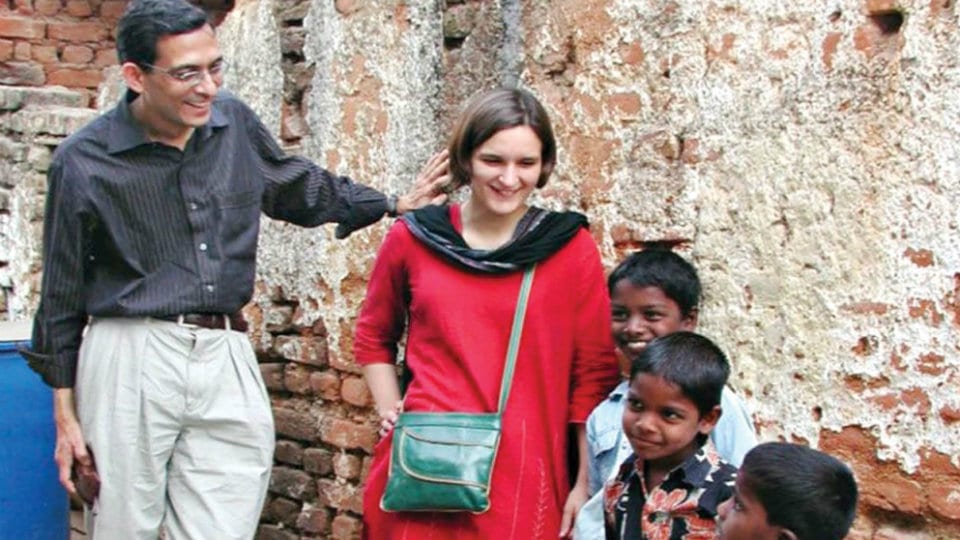 Ideas worthy of a Nobel Prize

Abhijit Banerjee, the Nobel Laureate for Economics, is a person of Indian origin and an International Professor of Economics at Massachusetts Institute of Technology (MIT). He along with his wife Prof. Esther Duflo and Fellow Researcher Prof. Michael Kremer being awarded Nobel Prize for their seminal work on poverty alleviation is indeed praiseworthy and makes every Indian proud.

Prof. Banerjee had his early education in India and much of his later research was focused on India and Indian economy. This study was a part of his quest for alleviating poverty not only in India but across the world. Towards this, his study encompasses education, health, agriculture and access to credit.

We at Pratham are particularly overjoyed because Abhijit Banerjee perceived the  Pratham model of teaching children as most effective technique. He adopted it as a basis of further study to suggest solutions to solve the crisis in children’s education in India and other developing countries. Prof. Banerjee quotes Pratham NGO by name where he spent considerable time observing the methodologies it used to improve learning in children.  It is certainly an endorsement to the effectiveness of Pratham’s approach to teaching and an honour to scores of Pratham grassroot volunteers working in remote locations. It strengthens our resolve that we are on the right path.

Prof. Banerjee and his team have used among other tools of study, the ‘Randomised Control Trials’ (RCT) to arrive at what solutions work and what don’t in different contexts and geographical locations based on data collected. This also involves breaking down large problems to smaller size both to understand better and to find more precise solutions. This facilitates better and more effective policy formulation.

This also negates the practice of ‘One Size Fits All’ strategy of Governments while formulating solutions to the problems faced by the people across the country. This is more so in a large country like India where there is a language, cultural, religious diversity every 100 kms.  This tool helps in developing tailor-made variants to achieve the best returns on investments made and in the shortest possible time. In keeping with this thinking, Pratham and its associates across India develop models of what works in their backyard rather than what worked well elsewhere.

Using this approach to finding solutions to improve learning levels of children in schools, Prof. Banerjee has used Pratham NGO model of teaching extensively. Particularly Pratham’s TaRL (Teaching at the Right Level)  to help children lagging in studies.  In a given class, there are those who are good in their studies and those who are not so good and remain so for the rest of their schooling.  This is not to say that the children who are lagging behind are not intelligent and incapable, but they are those who did not get timely help to solve their doubts. The continued neglect increases the gaps.  This may either result in the student failing in an examination or permanently dropping out of school.

Pratham groups children based on the child’s learning abilities and administers lessons appropriate to that group.  As children progress, they move to the next higher group.  Results of this approach as endorsed by Prof. Banerjee in his findings, have helped slow learners to catch up with the rest of the class. Teaching a child what he or she has failed to understand is the key to improve their learning.  But sadly the focus in most schools is completing the prescribed syllabus for the year and not whether the child has understood the lesson.  This is true both in Government and in Private Schools.

Annual Status Education Report (ASER) is an annual sample survey conducted by Pratham across the country to assess the learning levels of children in rural India since 2005.  As per the survey findings of 2018, less than 50% of class five children were able to read or do a simple math of class two level.  While releasing the ASER report in January 2018 in a function at Delhi, Prof. Banerjee observed that constructing school buildings, distributing books or giving free meals do not improve learning.  Governments resort to such handouts more to demonstrate that they are giving due priority to education.  But in reality there is no improvement in learning levels other than improving electoral prospects of the political party or the Government concerned.

The Abdul Latif Jameel Poverty Action Lab (J-PAL) is a global research centre working to reduce poverty by ensuring that public policy is informed by scientific evidence. Anchored by a network of 181 affiliated Professors at Universities around the world, J-PAL conducts randomised impact evaluations to answer critical questions in the fight against poverty.  Six studies were carried out to study the impact of Pratham’s TaRL programme before it could certify the effectiveness of the method. India is not alone in children not faring well in the Government Schooling system.  Many African countries who have similar issues have welcomed Pratham J-PAL joint venture to introduce TaRL approach to improve learning in their countries.

Pratham Mysore is an associate of Pratham India and has been working towards improving the quality of education in Government Schools since 2002.  It is in partnership with Government of Karnataka and working in 20 Districts impacting more than 7 lakh children.  TaRL has proved effective in bringing on par slow learners in over 24,000 schools.

In his congratulatory message to Pratham Mysore, former Secretary to Government of Karnataka  Ajay Seth said: “The importance of remedial teaching has got recognised at  world stage in the statement of Royal Swedish Academy. Effectiveness of Pratham’s approach is now acknowledged through the work of Nobel Laureates.  Congratulations to Pratham’s team.”

Besides TaRL, Pratham Mysore continuously innovates to help children in Government Schools to benefit from it. Its grassroot volunteers are motivated to find ways that will motivate all concerned.  As a result of this effort, certain programmes have been designed. Model Village is a concept being experimented in four villages of Chamarajanagar to involve the community to monitor school performance and mothers to support and participate in child’s learning. Twinning a Private School with that of a Government School is to help the latter to learn spoken English.

Chintana Chiguru identifies bright children in Government Schools (6th and 7th Std) and to improve their thinking, reading, writing and communicating skills. The objective is to encourage children to take up competitive exams. Pratham Prathibha Vikasan Karyakrama (PPVK) aims to discover and nurture talent in children in Government Schools. The initiative is to bring them to forefront of competitive excellence. While these are some programmes adopted in Karnataka, the learnings are available to anyone with a hope that through these programmes, children of India learn better.

We at Pratham are particularly overjoyed because Abhijit Banerjee perceived the  Pratham model of teaching children as most effective technique. He adopted it as a basis of further study to suggest solutions to solve the crisis in children’s education in India and other developing countries. Prof. Banerjee quotes Pratham NGO by name where he spent considerable time observing the methodologies it used to improve learning in children. It is certainly an endorsement to the effectiveness of Pratham’s approach to teaching and an honour to scores of Pratham grassroot volunteers working in remote locations.