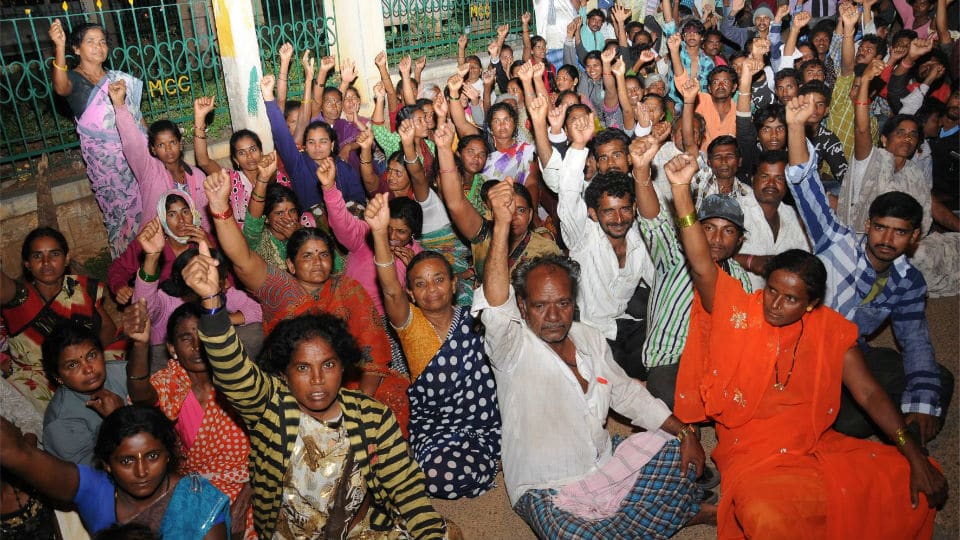 Mysuru: Hundreds of residents of Ekalavyanagar, who are Nomads, staged a demonstration in front of Metagalli Police Station here last night in protest against the Police action of taking four nomads into custody on charges of building illegal huts on the Government land at Ekalavyanagar in the outskirts of the city.

Following a compliant by PDO Ramdas that some people were illegally building huts on Govt. land in Naganahalli Gram Panchayat limits of the Taluk, the Metagalli Police who visited the spot on Monday afternoon, evicted the huts, besides taking four  into custody for questioning.

But as the four persons did not return even by evening, the nomads  and semi nomadic tribes of Ekalavyanagar thronged the Police Station demanding immediate release of the four.

Following the protest, the Police released the  four persons after issuing a notice to them.

But the protesters continued with their protest, alleging that the Police were hand in glove with land mafia and the authorities concerned should take measures for putting an end to the harassment of nomads and semi-nomadic people living in Ekalavyanagar.

Later, the community leaders held talks with Dy. Commissioner D. Randeep to look into the matter, following which the protest was withdrawn.