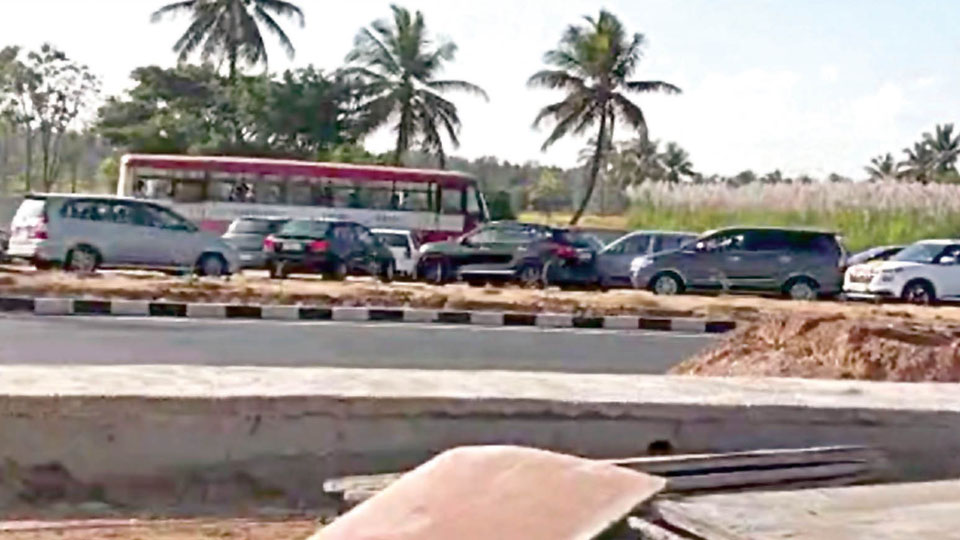 Mysore/Mysuru: On the busy Mysuru-Bengaluru Highway where the works are in full swing to upgrade the road as a 10-lane Expressway, traffic signboards have faded and have turned non-visible due to dust, causing confusion among motorists.

Vital signs guiding commuters to take left or right or to take deviations in the wake of road works have faded away. While motorists familiar with the stretch slow down ahead of deviations, others just about manage to go further, causing traffic jams and accidents. After they reach a point of no return, they scramble to switch lanes.

Last evening, motorists escaped a series of accidents near Kalasthavadi as vehicles piled up on the wrong side of the road as the drivers failed to observe a signboard indicating a deviation. Works of the Highway are being taken up on a war-footing and a flyover-like structure is being built at Kalasthavadi and Siddalingapura.

As it was a Sunday, there was a heavy flow of tourists heading towards Mysuru and those returning to Bengaluru. At around 3.30 pm, over 40 cars, 5 buses and 3 mini-buses missed the signboard at Kalasthavadi and instead of taking a left, they moved straight.

The vehicles were moving at a great speed on the new road and came face-to-face with other speeding vehicles moving towards Bengaluru. Seeing the oncoming vehicles, drivers stepped on their brakes, bringing the vehicles into a screeching halt. As a result, many cars halted haphazardly on the busy road, on both sides.

Fortunately, hearing the loud screeching sound, many drivers who were coming behind too applied brakes and avoided a collision. Later, over 50 vehicles who came on the wrong side had to scramble to take a U-turn to the service road. They returned to Kalasthavadi junction, took the underpass and then took a left turn to reach Mysuru.

With the city expanding at its seams and dozens of vehicles added to the roads each day, traffic experts say there is a need for comprehensive and consistent road signage and traffic signals to make roads more navigable and less accident-prone, especially on a busy Highway like this one where there is constant traffic movement from all sides and at the same time, road works are also on.

“Signboards, especially about deviations, need to be visible. Faded signboards or those that are not visible because of an obstruction, make driving difficult for those wearing spectacles as well as for senior citizens. Here the signboard at Kalasthavadi has been faded and due to the ongoing works, it has turned muddy,” said Santhosh Menon, who took the wrong route after missing the signboard.