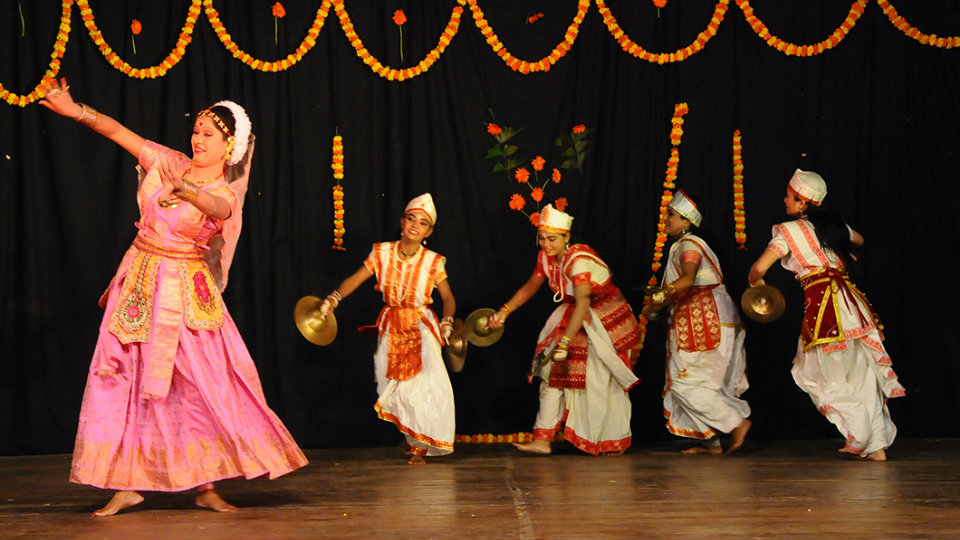 North East culture on a platter

IGRMS to organise Manipur and Assam Dance Festival on Jan. 10 and 11

North East India is a paradise unexplored and one of the best destinations for nature lovers, trekkers and wildlife enthusiasts. It includes seven States Arunachal Pradesh, Assam, Meghalaya, Manipur, Mizoram, Nagaland and Tripura, Hence also known as Seven Sister States of India. The North Eastern region also hosts one brother called Sikkim and some parts of Bengal as Darjeeling, Jalpaiguri, and Koch Bihar.

The region is well known for its distinct culture and traditional lifestyle. The place offers a mixed culture of Hindu, Christianity, Muslim and Buddhism. Buddhist culture occupies an important place and large number of ethnic groups when compared to other religions. Because of the region’s inaccessibility from the rest of world, it has been lucky enough to maintain most of its natural diversity and have been untouched from modernisation.

Some of the dance forms of the North East are explained below:

Pung Cholom is a part of the Sankirtana music by drummers in spotless white costumes. It is known for vigorous and acrobatic style of movements executed with great artistry and precision.

Thang-Ta is popularly known as martial art of Manipur. It is an art for self defence and also offence having a deep spiritual foundation and long historical tradition right from pre-historic times which reminds one of Spartan life of the Greek. The agility and movement of the sword men with exciting and artistic gesture makes the art a thriller.

Thougal Jagoi is a part of the famous Manipuri traditional Lai-Haraoba depicting the performance before the sylvan God and Goddess to bring peace and prosperity to the land.

Wherever there is disorder and calamity on earth, Lord Vishnu appears to restore peace and other thus the ten incarnation of Lord Vishnu are described by poet Jayadeva in the invocatory verse of Geeta Govinda.

Dhon Dholok Cholom is an indispensable part of the great Holi festival and belongs to the post-Vaishnavite culture of Manipur. Dhon Dholok is popularly known for agility and artistic precision in the part of the percussionists with thundering sound of the drums.

Far removed from the sophisticated dances of temples, this folk dance takes us to the exotic mountains of Kabui villages of Manipur. Kabui is a tribe living on the western mountains of Manipur and their dances are noted for vigorous footwork, sharp, clean and graceful movements of the body.

“Dashavatara” is a dance from of ‘Sattriya Nrity’. The dance is started with a ‘Krishna Vandana’ which describes childhood of ‘Lord Krisha’. The word Dashavatara is derived from Dasha meaning ten and Avatara meaning descent. Dashavatara refers to the Avatara of Vishnu, the Hindu god of preservation. Vishnu plays different roles to restore cosmic order.

Bihu is the most popular and greatest festival of Assamese people and other communities. None can think of Assam without the sounds and smell of the spring festival Bohag Bihu and the dance associated with that. Bohag Bihu has now become the conscious symbol of the new Assamese spirit — the meeting ground of various ethnic strains that have gone into the making of Assamese society.

The Pharkanti Dance is the most prominent cultural activities among the Rabha tribes. It is performed by a cultural troupe of men and women during the time of            funeral ceremony. In the mythology of the Rabhas, it has been popularised in the Rabha society and is led by the cultural institution, the All Rabha Kristin Sanmilan, Assam.

In ancient times, the Rabhas were living in the hilly areas where they practiced “Jhum Cultivation” to run their families where both male and female work in the field in the last part and first part of the year. On that day they worship to the God / Rishi (Siba) for getting more crops. And on that occasion they perform the Hamzar Dance.

READ ALSO  “Katordaan,” a brass vessel from Rajasthan on display at IGRMS

Bhortal Nritya as the name itself suggests is dance form, which is performed using Bhortal (a kind of symbol) on both hands by the dancer. A unique dance from originated at Barpeta, known as Satra Nagar. Bhortal dance has attained tremendous popularity not only in Assam but also in different parts of India and abroad. It is unique in its style of performance. There is hardly such form of dance in Assam performed with symbols or anything else on both hands from the beginning till the end. This dance has the capability of arousing devotional feelings.

Borgeet is also a dance form (Abhinaya) of Sattriya Nruthya; Borgeets are a collection of lyrical songs that are set to specific ragas but not necessarily to any taala. These songs, composed by Srimantha Sankardev and Madhavdeva in the 15th and 16th centuries, are used to being prayer services in monasteries associated with the Ekasarana Dharma, and they also belong to the repertoire of Music of Assam outside the religious context. Borgeet describes about Lord Krishna’s childhood and young stages. It also describes about the Lord Krishna’s indefinable beauty and dress sense.

This dance symbolises the furies of rain before New Year (Baishag). The wind wishes to destroy the old to prepare the earth for new days of production. It means the nature become furious and in order to destroy useless things, wind blows and it rains heavily. Bar-Dwi-Shikhl

is not a symbol of destruction but a symbol of creation. In this dance, young girls are the symbol of nature. They enter furiously flying their hair with wide legs and move in a great speed. It is a most speedy dance performed with drum and flute. The harmonious flow of the musical instrument with the dance gives the feeling of a wind with water. This dance is a kind of rhythm of soil.

In the full moon of the month of June of every year the principal festival of Rabhas “The Baykho’ is celebrated or worshipped in villages. The Bay means deity and Kho means great, that is to say, The Principal Deity. At the time of worship many fat pigs and fowls are sacrificed to the Goddess / Baykho so that there may be plentiful crops, rains, good health, prosperity and no sufferings, no earthquake throughout the year. On the eve of the prime festival of Rabhas, the Chathar Dance is performed by the troupes of unmarried young boys and girls on that particular day. This is very popular dance in Rabha society.