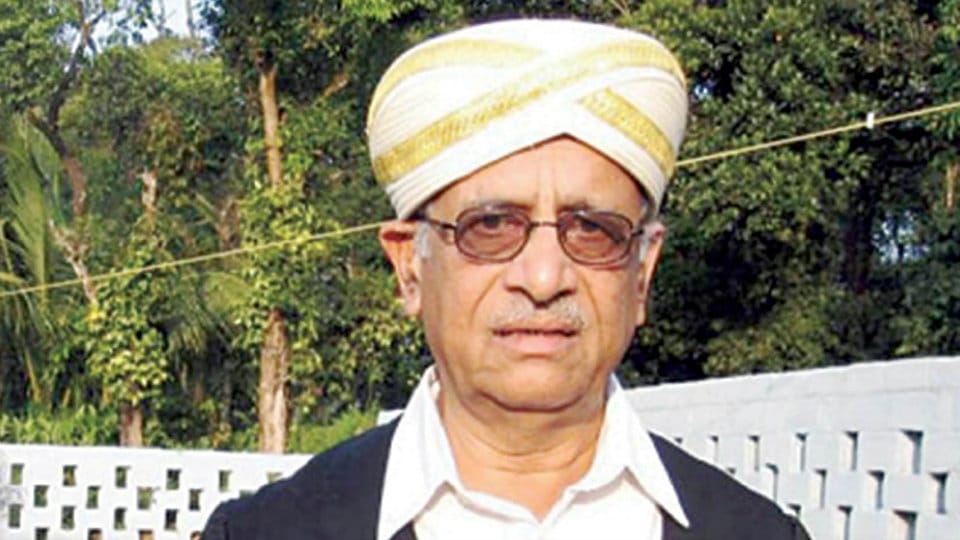 During 1975 Emergency, A.K. Subbaiah was the first Karnataka politician to be imprisoned and spent a total of 18 months in various jails before being released from the Bangalore Central Jail. D. Devaraj Urs was the Congress Chief Minister then. Probably, becoming a political prisoner was an important turning point in Subbaiah’s political career because it enabled him to know some of the National leaders of Jan Sangh personally.

When the Emergency was lifted and elections were held in 1977, he had an important role in Karnataka. However, when the Janata Party at the Centre collapsed and  Jan Sangh came out in its new avatar as Bharatiya Janata Party (BJP), A.K. Subbaiah was elected as the first President of the State BJP in 1980. This was another big turning point in Subbaiah’s political life. He became a pain in the neck for the then Congress Chief Minister R. Gundu Rao. He was a political sensation. His barbed speeches against Gundu Rao’s Government were with no-holds-barred. He played on the sentiments of patriotism and the prevailing corruption.

He made best use of a Minister in Gundu Rao’s Cabinet, C.M. Ibrahim’s alleged statement in a public meeting that he was given a Rolex wrist watch by a Dubai Sheik which also served as Visa for him. It was unbelievable, but during the 1983 Assembly election it must have created its impact on the voters. To everyone’s surprise, including that of the newly formed BJP, A.K. Subbaiah’s BJP won 18 Assembly seats. This enabled formation of the first non-Congress Government in Karnataka with Ramakrishna Hegde of Janata Party as the Chief Minister. One thought A.K. Subbaiah was the hero of Karnataka, but sadly, like the saying ‘Pride goes before the fall’, A.K. Subbaiah became very haughty and defiant with his RSS and BJP colleagues. He began to make statements that were contrary to the RSS and BJP principles and also uncomplimentary to Ramakrishna Hegde. The result was in 1984 A.K. Subbaiah, who thought he was indispensable to BJP in Karnataka, was unceremoniously expelled from the Party. Apparently, he was shell-shocked, found himself at large with no political party willing to touch him. But he continued to imagine that people of Karnataka admired him (or even loved him) and formed his own party with a bombastic name “Kannada Nadu Party.” It had an infantile death.

He later joined Congress party (!) and even got elected as MLC with the help of Gundu Rao!! I also worked for him in Mysore and he came to my house for dinner. It was one of the longest and boring nights for me. Non-stop monologue. He seemed suffering from political narcissism. He left the house at 2.30 am.

I remember  Subbaiah recalling his visit to Delhi to meet Choudhury Charan Singh (who was Prime Minister for few months when Indira Gandhi romped back to power) seeking possibility of joining his party. I think Lok Dal. He landed in Delhi in the evening and went straight to Charan Singh’s house. Singh was sitting with few party members in the lawn. He welcomed Subbaiah and then asked the latter to visit him next morning. When Subbaiah went next morning, as per appointment, Charan Singh was not able to recognise Subbaiah and asked his aide ‘Who is he?’ Subbaiah was surprised. He lost hopes and told me in his typical language ‘He is an idiot. Wonder how he became Prime Minister.’

Before I conclude I must mention my 1979 experience with my college-mate A.K. Subbaiah who was then the MLC, Leader of the Opposition in the Legislative Council. I went to Vidhana Soudha alone to meet him in his Chambers with high hopes. He was sitting at the head of a huge horse shoe table. Mercifully he recognised me and I mentioned the purpose of my visit — to help get my college-lecturer wife a transfer to Mysore (where I am settled). He made a ‘natak’ of telephoning some officers, then asked me to meet H.D. Deve Gowda! I knew he was trying to dodge, if not fool me.

Towards the end of his life  as a political non-entity, he continued his tirade against BJP and RSS, began supporting the minority communities losing credibility among the large number of people in Kodagu and Karnataka. The only consoling sentiment for him in his old age was that all his children rose in their respective fields of activities. Former Additional Advocate General of Karnataka A.S. Ponnanna is one of them. Subbaiah died in 2019 at the age of 85. Kodagu and Kodavas really missed a dynamic leader who would be the Chief Minister of Karnataka, if he had remained in BJP. It was, of course, his own undoing.