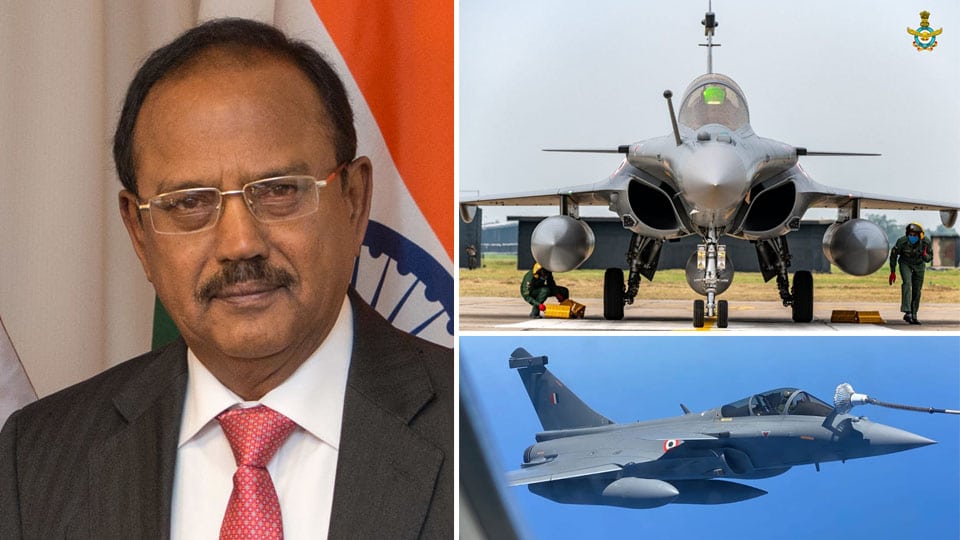 Recently I received a forwarded WhatsApp in Hindi, a speech by Ajit Doval, our National Security Advisor (NSA). Being a student of Ancient, Medieval and Modern (not current) Indian History in my graduate classes, it interested me. I guess it was an old long speech, the subject being such.

I requested R. Chandra Prakash, former President and now a member of Mysore Grahakara Parishat (MGP), a well-known NGO of our city, to translate it to English for me and he obliged. So here I am.

My reading of Indian History, written both by whitemen and Indians, clearly makes me learn that our Hindu Kings of the early 10th century ruling their individual Kingdoms in  different parts of what was called “Bharata” or “Bharatavarsha” were defeated one after the other by foreign invaders mainly because of two reasons: 1. The principle of dharma, strictly followed by Hindu Kings in times of war and when enemy was defeated. 2. The presence of Hindu Traitors inside the Palace and the Army holding high offices.

Every time the enemy invader was defeated, the invader was forgiven, granted pardon by the victorious Hindu King in keeping with his dharma.

But, the same enemy returned with more forces, better prepared, to launch a surprise attack and because of Hindu Traitors the enemy won. And the victorious invader did not have the kind of dharma to be followed like the Hindu Kings had and followed. In any case, for the invader the end in a war mattered, not the means. The invader would not even forgive the defeated Hindu King just as he was forgiven by the Hindu King when the invader was defeated earlier.

In fact, my understanding is, this phenomena of ‘enemy within’ helping the invading enemy first began in 326 BC when Alexander the Great invaded India from North-West winning the Hindu (follower of Sanatana Dharma) King Porus of Pauravas at the battle of Hydaspes. It was Raja Aambhi of Taxila who helped Alexander in his war with Porus the Raja in the region of then Punjab. Let it be. But pray the same phenomenon should not continue nor must be allowed to continue by our present rulers. I get a feeling that no effort was made after Independence till Indira Gandhi came to power to curtail this trend. However, after Indira Gandhi till Modi came to power the old phenomenon seemed to have surfaced. Hope India’s future dealings with its external and internal enemies will be different, absolutely pro-National. Pro-One United India.

Let us remember the time tested proverb “United we stand, divided we fall.” It was big empires in India founded by “An Indian Julius Caesar” (as described by a foreign historian) Chandragupta Maurya (320-200 BC), Ashoka the Great and Gupta (300-500 AD) that was a strong deterrent to foreign invaders, for example. It was only after India of the ancient and early 1st century AD got divided under different Hindu Kings that it became easy for foreign invaders to defeat these Kings one by one by means fair or foul. We all know that at the time we got Independence in 1947 there were about 565 Kings, Nawabs and Sultans ruling a divided India.

Now if we go to epic period, the strength of India was in its divine-like Kings and their far-flung empires. No wonder in the Ramayana it is claimed that Taxila (now in Pakistan) was founded by one of Lord Rama’s nephews. Mahabharata says that this story of the great war was first told in Taxila.

I am ruminating on this important question of National Security and Sovereignty of our Nation after reading Ajit Doval’s Speech and the news of the arrival of first batch of five Rafale Jet fighters from France to join the fleet of IAF. It is said Rafale jets are unmatched among its class of jets in the world. So India’s Defence capability is further strengthened, now specially to meet China’s present challenge in Ladakh.

Ajit Doval’s speech is important for us today in the highly charged border situation of our country. He says that he believes in the principle of “Shakti”, power. Best is to quote him to understand fully his belief.

“History is world’s biggest Court. There is no other Court bigger than that. The decision of the Supreme Court, the High Courts or even the Election (to different offices) will be only transient. After all these proceedings, what is left is only the History. And History has consistently decided in favour of only those who were powerful. History has never favoured those who followed the path of Truth and Justice (dharma).”

Ajit Doval then poses a most pertinent, intelligent and sensible question:

“Today, why is that there is Babar Road and not Rana Sanga Road in Delhi?”

He answers it himself: “It is because Rana Sanga was defeated and Babar had won.”

Good for our country if our own rulers, whoever they are, learn these lessons from History. Otherwise…