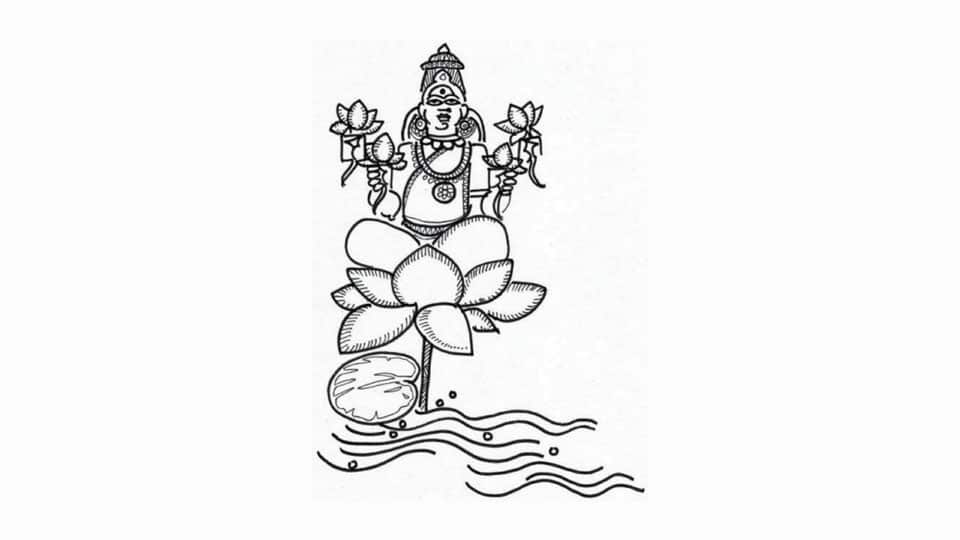 Lakshmi is the Goddess of Wealth. One of her many names is, Chanchala, the restless and whimsical one, who does not like to stay in one place. She loves to move around and so people are advised not to keep images of her in the house where she is shown standing; she may feel unwelcome and she may leave. So in traditional images she is always shown seated comfortably on a lotus.

The whole point of this rather visual characterisation is to inform people that wealth loves to move. The value of wealth emerges only when it exchanges hands. Lakshmi’s symbol is her footprint and it is always drawn pointing into the house. The idea being to align the restless and mobile nature of the Goddess with our own desire to see fortune favour us.

Realising the criticality of Lakshmi’s movement, rituals were created to encourage the flow of wealth in society. Typically, on festival days people were advised to wear new clothes. New clothes meant income for the weaver which in turn meant income for dyers, spinners and farmers who grew the cotton and silk. People were also encouraged to break old pots and buy new pots in festival time thereby boosting the income of potters and the economy.

In festivals like Dhanteras, people are encouraged to buy metal, especially iron and gold which in turn helped metal smiths and miners. Another important ritual was the exchange of gifts, especially food items, either prepared at home or bought from the sweet shop and shared with friends and neighbours. During festival time, the arts were encouraged thereby providing livelihood to artists. Musicians, dancers, singers, street performers were invited by landlords to entertain the village.

READ ALSO  The metaphor of the forest

Wealth moved in three ways — Bhiksha, Dakshina and Daan. Bhiksha was the lowest form where someone had to ask for it. Dakshina was a service fee, commonly associated with priests, but also given to other service-providers. From this has come the practice of Bakshish. The best way to allow wealth to move was Daan, to give away wealth freely, voluntarily and generously. During festival time, all three forms of exchange were encouraged: Bhiksha to beggars, Dakshina to priests and tradesmen, and Daan to everyone around.

As society evolved, the place where Lakshmi exchanged hands was the market place and the fairs. The fair was a temporary market place that moved from place to place, establishing itself during festival time, catering to the needs of devotees and pilgrims. In fact, India’s biggest market places are also India’s biggest pilgrimages, and the peak sales season is invariably festival time, indicating the close association of economy and religious practices.

As one hears the story of Lakshmi and the importance given to new clothes and new vessels in rituals, one cannot help wonder if economy was in the minds of the Rishis when they designed the ceremonies. Lakshmi, after all, is the lifeblood of society.

READ ALSO  So many different Indras