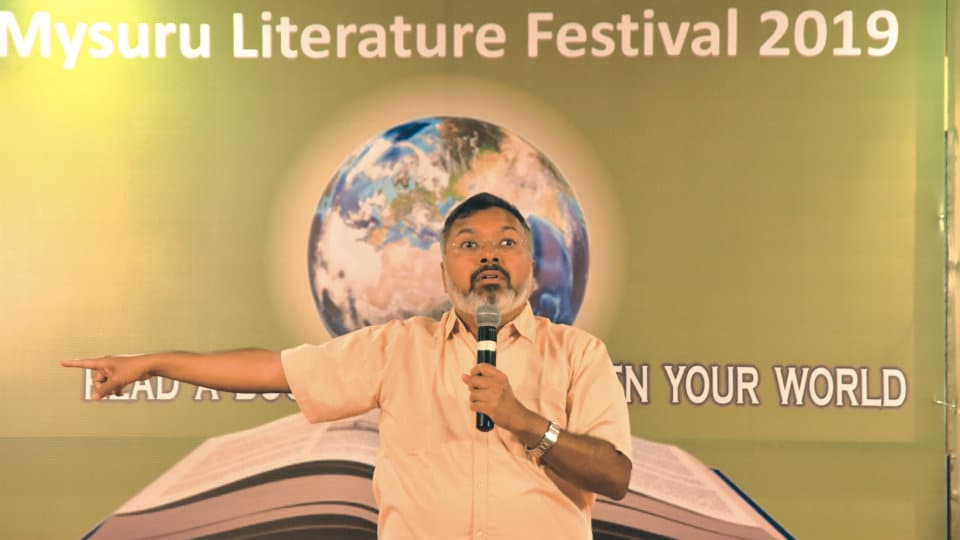 Mysuru: Delivering the keynote address during the inauguration of the two-day Mysuru Literature Festival, Mythologist, Writer and Star of Mysore columnist Dr. Devdutt Pattanaik said that both the two greatest epics-Ramayana and Mahabharata, are selling people the idea of Dhamastastra.

Speaking on his book ‘Ramayana versus Mahabharata,’ he said that the authors of the epics-Valmiki and Vyasa, were part of the epics and that is why the epics are Ithihasa, meaning History.

Pointing out that unlike Puranas, which were the interpretations of the people, Pattanaik said that people could not understand the Dharmashastra and thus it was retold in the form of epics.

Observing that Indian faiths such as Jainism, Buddhism and Sanathana Dharma are not judgemental and does not speak about justice, he said that their philosophy is about Dharma and Moksha. In these faiths, God is not a judge, who decides whether one is right or wrong or whether one is good or bad. God is just an accountant, who takes stock of one’s deeds and decides if one is eligible for Moksha, he maintained.

Pointing out that both Ramayana and Mahabharata were written when the Indian society was at the crossroads, the Writer said that the first chapter of both the epics deal with the birth and growth of the protagonists. The second chapter is Vanaparva or the seasoning of the protagonists to become rulers, he opined.

Stating that both the epics end with wars and post-war tragedies, he said that while Dharmashastra is difficult to explain to the people, the epics, by way of story-telling, are easier for the people to understand.

He further said that the period during which the two epics were written was after the collapse of the Maurya dynasty and the rise of the Gupta Dynasty which roughly dates back to 2,000 years.

Wellknown Film Director B. Suresha who was a panelist on the topic Chalana Chitra Prapanchadalli Nirdeshakara Kamaal said that the way he used to read novels changes after he watched Girish Kasaravalli’s film Mane which was a cinema of its own kind.

Pointing out that even writer Vydehi too had welcomed the change that the movie had brought about, Suresha said that novel based cinemas were like the shoots of a tree. Calling upon all writers to scrutiny the scripts with an open mind, he observed that every cinema paved the way for a new learning.