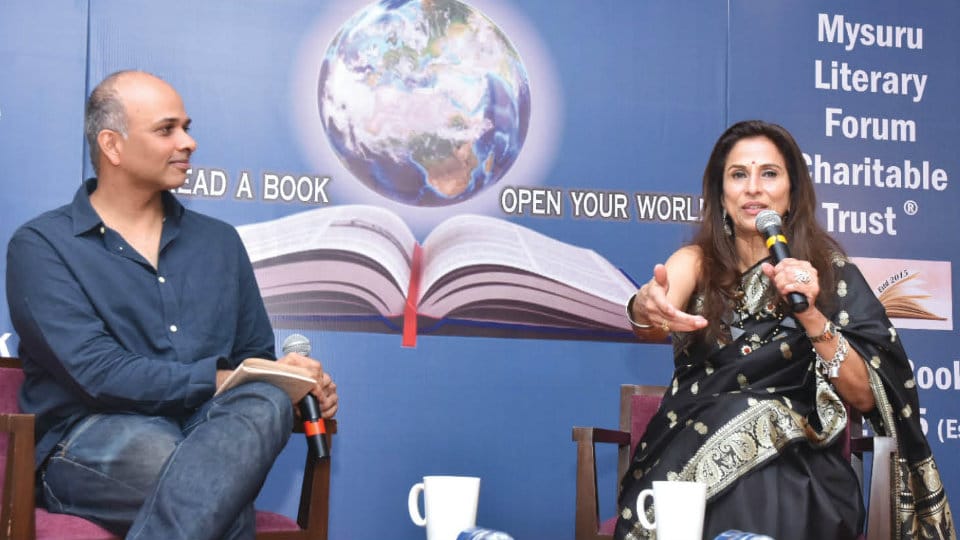 Mysuru: “Press freedom though hyped about over the years remains a misnomer even today as censorship still exists,” opined Writer Shobhaa De.

She was replying to a question posed by Writer Mahesh Rao during a panel discussion on ‘Shobhaa at 70 — Selective memory’ on the second and concluding day of the third edition of Mysuru Literature Festival-2019 underway at Hotel Southern Star here this morning.

Shobhaa pointed out that posting any information on social media is difficult now as a possible threat always looms large. Referring to ‘MeToo’ episodes that shook the nation some time ago, she regretted that many of the accused have returned to work thus closing the chapter. She opined that it was the right occasion when many harassed women were able to vent the agony they had experienced.

She suggested youngsters ‘Be yourself’ suggesting them that there is no necessity to ape anyone.

Peace across globe is vital

Speaking at the panel discussion on ‘From diplomacy to peace-building in South Asia through music’, former Indian Ambassador to the US Nirupama Menon Rao opined that a successful diplomat can bring peace between two countries.

She observed that communication is super fast now, thanks to internet and social media. She contended that a diplomat can no longer sit in an ivory tower like decades ago, as the person carries a lot of responsibility to be exercised cautiously. She opined that India is good in maintaining peace.

When questioned as to why problem is never ending with neighbouring Pakistan, Nirupama observed that Jammu and Kashmir was the bone of contention and asserted that peace efforts should be initiated by Pakistan.