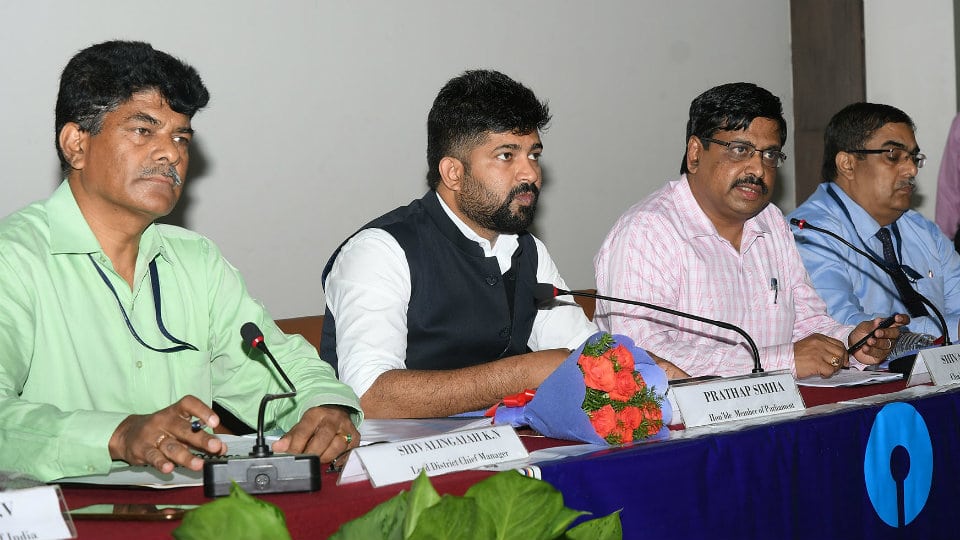 Do not turn away eligible beneficiaries of MUDRA scheme, MP warns Banks

Mysuru: Complaints on the implementation of Pradhan Mantri Mudra Yojana (PMMY) came to the fore at the Quarterly Progress Review Meeting of Lead Bank (SBI) at the ZP Hall here this morning.

Addressing the meeting, Mysuru-Kodagu MP Pratap Simha said, the PMMY under the Micro Unit Development and Refinance Agency (MUDRA) was one of the key initiatives of the Prime Minister for job creation.

Pointing out that he had received a number of complaints on the implementation of this ambitions scheme, the MP asked the Bank Managers not to turn away eligible entrepreneurs who claim loan under the three categories of PMMY — Shishu, Kishore and Tarun.

Noting that the Pradhan Mantri Skill Development Training Centre at Yelwal is training 940 youths on skill development, Simha said that the Banks should cater to the funding needs of the beneficiaries.

Warning of actions against such bank officials, who turn away eligible beneficiaries, the MP underlined the role of banks in the economic progress of the country.

Referring to agricultural loans, Simha said that the Bank officials should take measures for ensuing the success of the Union Government’s initiatives such as Start Up India, crop loan, Fasal Bima Yojana etc.

Expressing disappointment over the implementation of Fasal Bima Yojana in the district, he asked the Bank staff to sensitise the farmers on this farmer-friendly scheme and to put up large posters outside the Banks which are implementing the scheme. He called for carrying out wide spread campaign on making the Fasal Bima Yojana, a grand success.

The MP also released Mysuru District Credit Plan for the year 2017-18, which saw an increase of the total plan expenditure of 16 percent over the previous year.