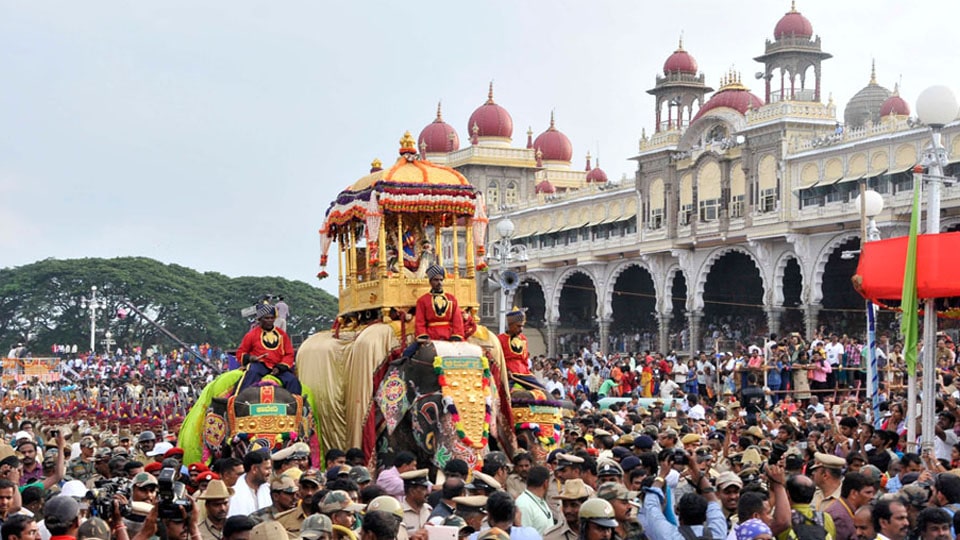 Mysuru, wearing attractively got up looks, is once again witnessing advance action by both functionaries in the State Government and the city’s residents who are known to nurture festival-related customs that have endured for centuries and cherish the celebrations with undying enthusiasm. The once-in-a-year event, Navaratri in the orthodox circles and Dasara in public domain begins on 29th day of this month and concludes on 8th day of next month. While it is well nigh impossible to calculate the cash outgo for the celebrations from the citizens, individually as well as the many tradition-respecting groups, the State Government’s spend this time, as sanctioned, is reportedly 18.5 crore rupees. As usual, the post-festival days will witness criticism, observations and remarks with words of both adulation and accusation, particularly of the officialdom that are bound to pass into the record rooms of the media in due course of time. In this backdrop, the call by the District-in-Charge Minister to come up with unique and novel ideas from the officials to make the festival celebration grand augurs well for the city and its residents.

The annual festival’s core message being victory of good over evil, its celebration as Navaratri in 2010 marked its 400th anniversary, the tradition originating in the year 1610 during the rule of Raja Wadiyar (1578-1617), the then monarch of the Kingdom. Royal patronage for celebrating Navaratri having ceased, the scale of action now rests with the successive Governments, supplemented by people’s inputs. Has the festival’s message, mentioned above, lost its place in the glitz and glamour at present is for people to ponder.

Navaratri festival’s spiritual fervour, while enduring to this day is more visible in the homes of Mysureans sticking to time-honoured customs, beliefs as well as traditions and places of worship while the factor of entertainment has tended to dominate public functions, although concerts of renowned exponents of classical music in many languages contribute to the stable ways of celebrations. Open invitation to officials only to come up with ideas for unique and novel ways of celebrations may have to be extended to aam aadmi of Mysuru and elsewhere. Whatever way the festival gets going, while charges of apathy on the part of those in charge cannot be avoided, safeguarding life and limbs of citizens as well as the assets, including heritage structures across the district, in addition to not compromising on cleanliness and sanitation call for vigil by both public servants and the city’s public at large.

Every visitor, either from other countries or from within, coming to the city to witness the festival’s celebrations, will be virtual brand ambassador to Mysuru’s culture. That should awaken all citizens and administration in the city to act in unison.