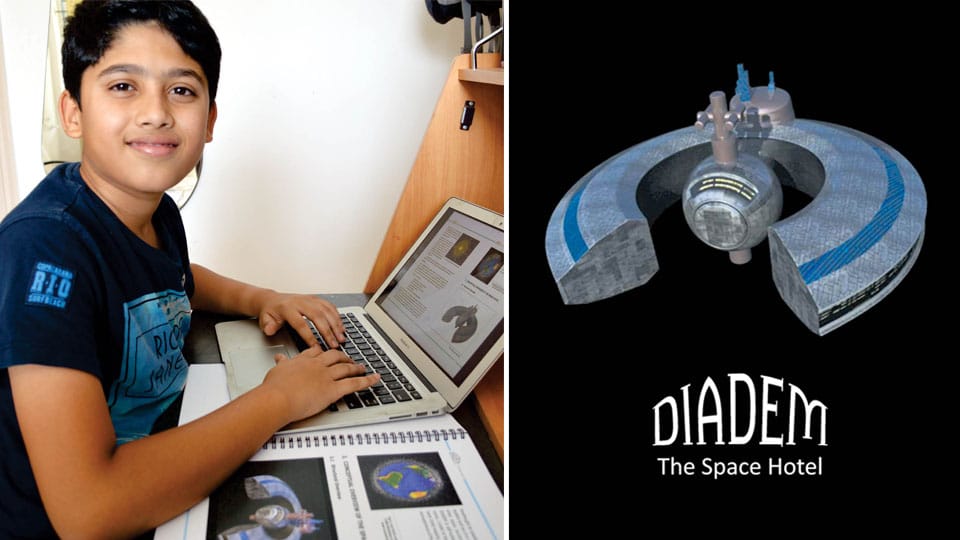 Mysuru: Mukkatira Neerav Aiyappa, a Class 7 student of National Public School International (NPSI), Mysuru, who participated in the Annual Space Settlement Contest, has bagged the first place in Grade 7 Category for his proposal of a Space Hotel ‘DIADEM.’

This international competition invited all students around the world up to 12th Grade to participate in its 2018 edition.

Neerav will receive a NASA certificate and has been invited to attend the NSS 37th Annual International Space Development Conference to be held at Sheraton Gateway Hotel in Los Angeles, California, USA, from May 24 to May 27, 2018 for a poster and oral presentation of his winning proposal. His project and ideas will be used by NASA for its future space programmes.

Speaking to Star of Mysore, Neerav, who has been working on the project since 11 months, said that among various forms of tourism like eco-tourism, nautical tourism, wellness tourism and medical tourism, a new concept has emerged in the form of space tourism, kindling interest to explore various destinations. Rather than seeing comets, planets, and constellations on a telescope, space tourism provides a privilege of experiencing first-hand the beauty of comets, asteroids, stars and planets, he added.

Space tourism will not only provide new vacation experience but create a new view to the earth, transforming the thoughts and perception among humans socially, culturally and emotionally, inspire new careers for the generation of engineers and will open newer fields for research in space medicine, nanotechnology, physical sciences and others, he said.

Through his project, Neerav has created a ‘Space Hotel’ providing space tourists a unique experience of a lifetime and enrich space and its potentials. “My project aims to create a ‘wow’ factor in the field of travel, provides job opportunities, ability to renew space exploration and research, explores possibility of hypersonic travel and have a newer perspective of earth,” he said. He was a finalist at RYSI Award (Raman Award) held on Mar. 5, 2018 at Panchavati (Sir C.V. Raman’s residence) in Bengaluru where he demonstrated the principle fluid and thermodynamics in intermediate category  with a working model.