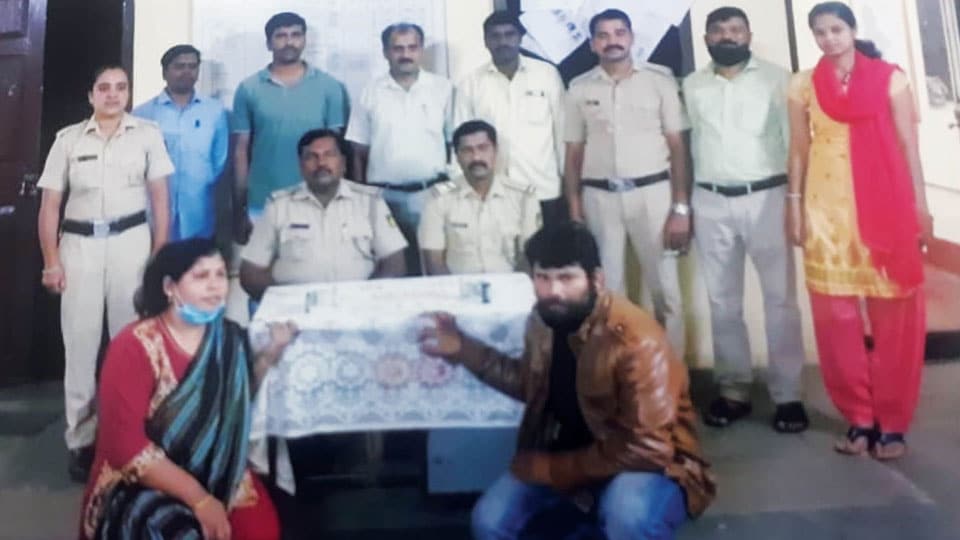 The arrested are 40-year-old Sangeetha Das, a native of Odisha and a resident of Bengaluru and her accomplice 32-year-old Mohsin Khan, a native of Chhattisgarh. The Police have recovered Rs. 35,000 cash, Aadhaar Card, Driving Licence and other documents from them.

On Aug. 29 at about 6.45 pm, Sangeetha, who came to the jewellery shop of Bhagavathi Jain in Agrahara here, told Jain that her daughter was very sick and pleaded Jain to give her Rs. 1 lakh by pledging her four gold bangles.

Believing Sangeetha, Jain asked for her Aadhaar Card, took a copy of it and gave her Rs. 1 lakh cash. While Sangeetha was speaking with Jain, her accomplice Mohsin Khan was keeping a watch outside the shop.

Jain, later took the four bangles pledged by Sangeetha to a gold-testing shop on Ashoka Road, where he came to know that the bangles were gold plated copper bangles. Jain immediately lodged a complaint at K.R. Police Station. The Police, who registered a case, inspected Sangeetha’s Aadhaar Card copy and came to know that she had pasted her photo to someone’s Aadhaar card and had taken a colour print of it.

The Police team, led by KR Inspector Srinivas, who intensified their investigation, traced the accused at Srirangapatna on Tuesday at about 11.30 am and succeeded in arresting them. The accused were produced before the Magistrate, who remanded them to judicial custody.

Police said that Sangeetha, who is a MBA graduate, was running a computer training centre in Bengaluru.