Home » Columns » Of two books, one old and one new! 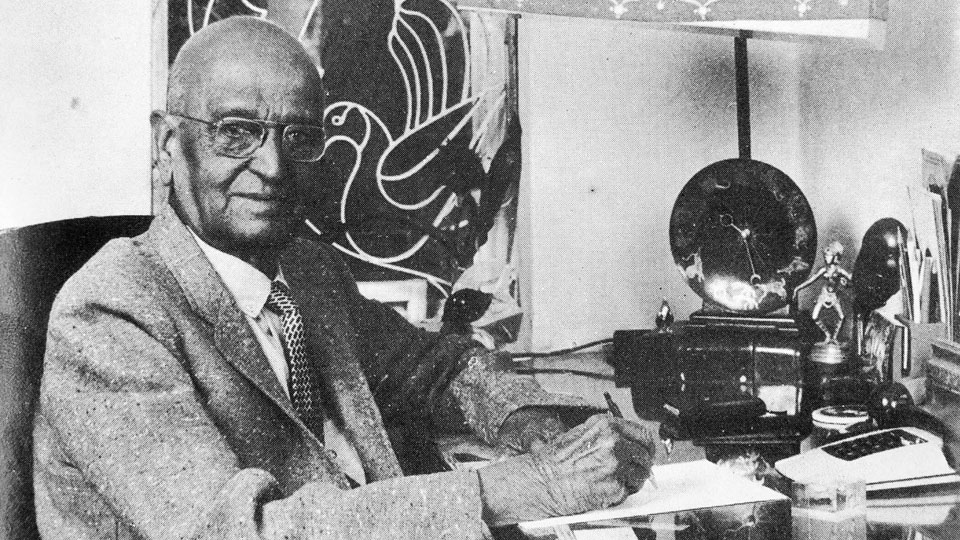 Of two books, one old and one new!

Three days ago, a picture in Star of Mysore showing a son and his mother standing near a road signboard, caught my attention. When I read on, I discovered that it was a picture of the author Devaki Jain and her son, TV news reader and anchor, Sreenivasan Jain, who on a visit to the city, were photographed standing next to the signboard that marks a Circle in Chamundipuram named after M.A. Sreenivasan, their father and grandfather, respectively.

Devaki Jain, a Padma Bhushan awardee, is a well-known Indian economist and champion of women’s rights who has written many books. The two that I have read ‘The Brass Notebook’ and ‘The Journey of a Southern Feminist’ are both very good, with the former, according to me, scoring over the latter in readability. Devaki’s son, Sreenivasan Jain, is a journalist working for the NDTV since 1995 and I remember him from the days when I used to watch TV news. But that was a very very long time ago when news meant showing what was happening. Now, with facts no longer being sacred, when news means showing only what the sponsors of each channel think and believe in, however far from the truth it is, it no longer appeals to me and so I waste no time on watching it.

Devaki’s father, Mandyam A. Sreenivasan was one of the very senior bureaucrats of our State who occupied many important posts during his long and checkered career. He later became a Minister in the Princely State of Mysore and even went on to become the Dewan of the State of Gwalior. My first knowledge about this man came when in the year 1992 I bought an interesting looking book at a book stall in Bangalore. The book titled ‘Of the Raj, Maharajas and Me’ was a kind of narrative autobiography written by Sreenivasan and it turned out to be so interesting and absorbing that after my return to Mysore, I completed it in one sitting and immediately decided to go back to Bangalore and meet the writer in person for a tete-e-tete.

So, in exactly three days, I was in the vicinity of his house, looking for someone whom I could ask for directions on how to reach it. Although the writer had mentioned in his book how he came to acquire the plot of land on which he built that house and how he had named it ‘Taranga’ which means waves, because it was located on the banks of the Sankey Lake, my difficulty lay in the fact that the house had almost no visible approach road. It was only with much difficulty that I gathered from some workers digging a trench along the roadside, that it could be reached only by going through the forest department nursery located nearby.

When I negotiated what seemed like a maze of overgrown greenery and rang the doorbell, surprisingly, the genial old man himself opened it, thankfully with a smile, albeit with a very perplexed look on his wrinkled face! But even before I could introduce myself or tell him the reason for my unannounced visit, he seemed visibly pleased to see me, as if he had been eagerly expecting me. I quickly surmised that this was because I was holding his book, face up, with both my hands, as if I had come to his doorstep to gift it to him!

What followed was a hour-long chat over tea served by his cook, with the two of us seated comfortably on the cushioned cane chairs in his verandah. When I discovered very quickly that he was as eager to tell me all about his heydays as I was to listen to him, I felt much relieved and my sense of guilt at having intruded on his privacy quickly vanished. And, after getting my copy of his book autographed by him, when I took leave, he asked me to drop in and pay him a visit whenever I was in Bangalore, which was when my guilt turned to joy!

I was able to visit him half a dozen times after our first meeting before he passed away on 15th, January 1998. At every one of these meetings, thanks to his amazingly astute memory, despite his advancing years, he was able to recount details of incidents from his life with absolute clarity and he would take much pleasure in narrating them. His book, which is now out of print and unavailable anywhere, is full of interesting incidents both from his personal and public life and is a great repository of the information about what life was like under the able administration of our Maharajas and the intrigue, including outstanding honesty and shameful treachery that were inseparably intertwined with it.

A sceptic becomes a believer!

Very recently, I visited a book exhibition that had come to our city. It was a most unusual one, where books were sold not by numbers or even weight as they sometimes are, but by volume! At the very entrance, visitors were urged to pick up card board boxes that came in three sizes and fill them till the brim with books of their choice and pay the price stipulated on the box accordingly.

With my virtual greed for books, I had picked up the biggest of the three boxes and was standing at the billing counter, wondering how I would carry it to my car which was parked a long way off, when a smart young girl approached me and after introducing herself as Rachitha, offered me a book which she was selling from a separate counter. She told me that the book titled ‘Inner Trek’ had been penned by her father, Mohan Ranga Rao and it was being sold at a discount for the duration of the exhibition.

I took the book from her and after a cursory glance at it, decided to buy it because I knew her dad to be a sibling of the city’s well-known Ranga Rao Family which most Mysureans know as a large business conglomerate flourishing over almost a century. When I offered to pay for it, Rachitha smiled and said she was giving the book to me as a gift. Although I am unable to say whether she was impelled to do so because she saw me as a book-lover, going by the heavy load of books I was carrying or because she had an inkling of who I was from my weekly column in SOM but I certainly felt very pleased with her generosity and thanked her. I also went on to tell her that I knew most of her uncles very well and Dr. R. Sridhar, the one just older to her dad, was a close friend of mine over many decades.

After I returned home, since it was the weekend, I got down to reading her book immediately and put it down but only after I finished reading it completely! It was a most absorbing account of a man who was never spiritual all his life, who set out on a pilgrimage to Lake Manasarovar and Mount Kailash in Tibet, one of the world’s most sacred spots for any devout Hindu. In a very down to earth and candid admission, Mohan very honestly tells about how he never was a believer in any kind of spirituality, let alone being a follower of any religious rituals, believing all through his life that a good life was all about going about it with honesty and uprightness in all that you did. That was the part that touched me most and held me glued to his book. He admits that he was drawn into the ritual of participating in a homa here in Mysuru, only on the urging of his wife, Mamatha who was more religious than him and who felt that this one act would make him tide over the adversities that had then been afflicting their life. And, they had a very generous helping of them which started with his eldest daughter being born blind and then succumbing to cancer at the tender age of eight years.

This was followed by losses in business and threats from the underworld that forced him to part with his landed properties for throwaway prices. His wife followed up their participation in the homa with a vow to undertake a trek to Mount Kailash that she was told would clear all the hurdles in their path.

Any man, plagued by seemingly unsurmountable problems, like a drowning man, naturally clutches at every available straw and so even the sceptic in him agreed to accompany his better half in her quest for succour and salvation. What followed was a most arduous but most life changing trek of their lives, over treacherous, snowy mountains that instead of leaving them tired and weary and sad because of the many fellow pilgrims who perished, left them with their souls refreshed, renewed and relieved!

To my knowledge, all pilgrimages, irrespective of the faiths and religions we follow, do that and that’s just what they are meant to do. And, when you come to think of it, most soul satisfying pilgrimages are not easy to undertake, requiring much preparation and steeling of the resolve before you embark on them. Their hardship, their privation, the strain they impose on our bodies and even the great peril they put us in make us soar above our sense of pain. The ‘Inner Trek’ is a book about all this and more…it is a story of a mountain that moved a man and a sceptic who became a believer!

7 COMMENTS ON THIS POST To “Of two books, one old and one new!”